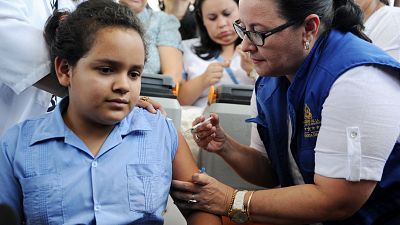 Many children around the world - including this girl in Honduras - are now vaccinated against the cancer-causing human papillomavirus (HPV)   -   Copyright  AFP
By Tom Bateman  •  Updated: 04/11/2021

Researchers in the UK have found that vaccinating children against the virus that causes cervical cancer can cut rates of the disease by almost 90 per cent.

Women who were vaccinated against the human papillomavirus (HPV) at the age of 12-13 were now 87 per cent less likely to develop cervical cancer than an unvaccinated person, the researchers found.

Those who received the HPV vaccine aged 16-18 were 34 per cent less likely to develop cervical cancer, while those who got the jab aged 14-16 saw a 62 per cent reduction.

The HPV vaccine also limited the development of precancerous cervical cells, leading to 17,235 fewer cases of cervical carcinoma than would be expected in vaccinated cohorts in England.

"It’s been incredible to see the impact of HPV vaccination, and now we can prove it prevented hundreds of women from developing cancer in England," said the study's lead author, cancer specialist Peter Sasieni from King’s College London.

The new study published in the Lancet medical journal on Wednesday tracked data from the National Health Service (NHS) in England, which began offering the Cervarix HPV vaccine to teenage girls in 2008.

"It’s a historic moment to see the first study showing that the HPV vaccine has and will continue to protect thousands of women from developing cervical cancer," said Michelle Mitchell, chief executive of medical charity Cancer Research UK, which funded the study.

'The power of vaccines'

HPV spreads through skin-to-skin contact, and works best when given to children before they become sexually active, according to advice from the UK's NHS.

The UK's immunisation programme was expanded to cover all teenagers in 2019. A newer vaccine, Gardasil, was introduced in 2012. It protects against nine strains of HPV which cause cervical cancers, as well as genital warts and cancers of the neck, head, anus and genitals, the NHS said.

It is now routinely offered to 12 and 13-year-olds in the UK, but those who miss it are still eligible to receive their jab until they turn 25.

The study's lead author Sasieni said the findings showed that vaccination programmes could all but stamp out some cancers.

"Assuming most people continue to get the HPV vaccine and go for screening, cervical cancer will become a rare disease," he said.

"This year we have already seen the power of vaccines in controlling the COVID-19 pandemic. These data show that vaccination works in preventing some cancers".

Together with researchers from the UK Health Security Agency (UKHSA) and the National Cancer Registration and Analysis Service (NCRAS), the study's authors estimated that the vaccination programme had prevented around 450 cases of cervical cancers during the 11 year period from 2008 to 2019.

"These remarkable findings confirm that the HPV vaccine saves lives by dramatically reducing cervical cancer rates among women. This reminds us that vaccines are one of the most important tools we have to help us live longer, healthier lives," said Vanessa Saliba, consultant epidemiologist for UKHSA.