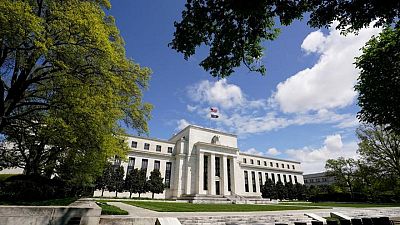 – The Federal Reserve’s taper in 2014 was preceded by sharp gyrations in Treasury markets and helped lay the foundations for a massive rally in the U.S. dollar.

With the Fed widely expected to soon begin an unwind of its $120 billion in government bond buying, here’s a comparison between the market backdrop around the time of the Fed’s most recent unwind and today.

The Fed’s taper of the $85 billion a month bond buying program, which it began in response to the 2007-2009 financial crisis and recession, ran from January 2014 until October of that year.

Since then the central bank’s balance sheet has ballooned to $8.6 trillion as policymakers slashed rates to near zero and rolled out a raft of measures, including monthly government backed bond purchases, as they fought to support the economy in the wake of the COVID-19 outbreak last year.

While U.S. monetary policy was far from hawkish in 2014, it stood in contrast to the ultra-dovish trajectories of central banks in Europe, Japan and other countries, who were still fully supporting their economies with stimulus while the Fed was curtailing its bond buying.

A widening between the yields on U.S. Treasuries and government bonds in other countries helped spark a rally in the dollar, which rose nearly 13% against a basket of major currencies in 2014.

The global monetary policy picture is different this time around, with some investors betting that central banks in the U.K., Canada and other economies are likely to soon raise interest rates to combat a global surge in inflation.

Signs that the Fed is more concerned about inflation than it has previously indicated, however, could buoy U.S. rates and potentially support the greenback, analysts said.

Bond yields rocketed higher in 2013, after then-Fed chief Ben Bernanke alluded to the policymaker’s thinking on plans for pulling back its monetary support in an appearance before lawmakers.

This time around, Fed Chair Jerome Powell has tried to prepare markets for the start of a taper well in advance.

Still, U.S. bond markets have experienced gyrations in recent weeks as some investors bet the central bank will need to be more hawkish than expected to combat inflation.

Meanwhile, rising yields on expectations of tighter monetary policy and rebounding growth have put the U.S. bond market on track for its worst year since 2013. Yields move inversely to prices.

The S&P 500 stood near record highs as the Fed kicked off its taper in 2014 and continued to fresh peaks after the unwind began.

Though stocks are at records today as well, valuations have ballooned over the years, leading some investors to worry that some areas of the market—including the big growth and technology stocks that make up a large chunk of the S&P 500—may be more vulnerable to higher yields and a more hawkish monetary policy stance.