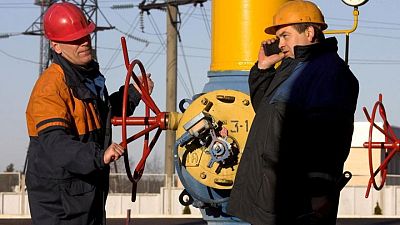 By Nora Buli and Susanna Twidale

-A major Russian pipeline that supplies natural gas to Europe remains stuck in reverse after requests to transport gas westwards through it into Germany were abruptly withdrawn, data on the website of its German operator showed.

Russian gas has not flowed to Germany via the pipeline since Saturday. Instead, supplies are being sent from Germany to Poland in a reversal that has sent benchmark European gas futures up almost 18% this week.

The switch comes against a backdrop of soaring gas prices in Europe and accusations from some politicians in the region that the Kremlin is not increasing supplies and calming spot prices in order to pressure Germany and the European Union to approve the Nordstream 2 pipeline, which will bring gas from Russia directly to Germany, bypassing Eastern Europe.

Moscow has denied this and has said it is meeting its contractual obligations, something confirmed by European companies contacted by Reuters.

The level of Yamal flows between Poland and Germany and their direction are managed by Gaz-System in Poland and Gascade in Germany, based on customers’ requests.

Entry renominations, or requests to transport gas into Germany on the Yamal-Europe pipeline reverted to zero after earlier hitting 13,521,200 KWh/h for Thursday, data on the website of Gascade showed on Wednesday.

News the flows would not be restarted afterall left the front-month TTF gas contract almost 11% higher on the day at 78.95 euros per megawatt hour, after it dipped to as low as 75 euros per MWh when the requests were published.

Gas traders initially speculated that the brief reversal in the direction of flow renominations was a technical glitch.

Gaz-System declined to comment on specifics and Gazprom did not respond to a request for a comment.

Traders said gas prices were unlikely to fall significantly unless there was evidence of a consistent return of flows from Russia through the pipeline.

Gazprom-controlled gas storage sites in Europe have less gas than usual for this time of year, with Russia saying it is concentrating on replenishing domestic stocks before releasing any more gas to Europe. It expects its own replenishment process to finish by Nov. 8.