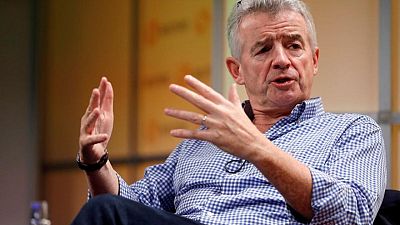 By Conor Humphries and Tim Hepher

DUBLIN -The boss of Ireland’s Ryanair on Monday ramped up a war of words with Boeing, calling the U.S. planemaker “delusionary” for imposing what he termed a double-digit percentage price hike for 737 MAX 10 jets in talks this year.

Chief Executive Michael O’Leary also said Boeing needed to “get its shit together” after what he described as delays in the delivery of 65 jets from an existing MAX order, though he was “reasonably confident” they would arrive for the summer peak.

A Boeing spokesperson said it was committed to supporting Ryanair as a long-standing partner, but added it would “continue to be disciplined” in commercial decisions.

Industry sources blamed the delays on shipping problems for galleys linked to a worldwide logistics logjam.

Europe’s largest low-cost carrier in September abruptly ended talks with the U.S. planemaker over an order of 737 MAX 10 jets worth tens of billions of dollars because of differences over price.

“Boeing out of the blue sought a … substantial double-digit price increase. I don’t understand the strategy,” he said, before reiterating that Boeing badly needs Ryanair’s business. In a call with investors, O’Leary said he was having a “marital tantrum” with Boeing, Ryanair’s long-time sole supplier.

O’Leary in September said Ryanair had been in talks to order at least 100 of the 230-seat MAX 10.

Sources say the dispute over MAX 10 was already rumbling when Ryanair ordered 75 more of the smaller MAX 8-200 version in December last year. Two industry sources said Ryanair had rejected previous lower offers on the MAX 10 since that date.

Asked on an investor call whether the price increase was compared to an earlier offer or compared to prices paid in the past, O’Leary declined to comment.

Insiders say brinkmanship and flared tempers are more common in the cut-throat aerospace industry than executives care to admit, in contrast with the polished ‘win-win’ arguments favoured whenever such hard-fought deals are announced publicly.

Ryanair and Boeing have often clashed behind the scenes as Europe’s pioneering low-cost carrier insisted on the lowest possible prices, echoing fraught negotiations between Airbus and some of its key low-cost customers. But it is unusual for the knockabout to become public. The spat partly reflects two sources of abnormal volatility stemming from overlapping crises, industry sources say. First is uncertainty over the shape of the recovery, with Ryanair and Boeing appearing to bet on different paths. While O’Leary has said Boeing is ignoring reality about prices, he has also said demand is likely to snap back quickly. Second is the uncertainty that swirled around valuations for the MAX – once Boeing’s most reliable cash and profit benchmark – in the wake of a two-year safety crisis. The MAX 10 has struggled to keep up with runaway sales of the Airbus A320neo and the industry began the year uncertain how much the market would pay for it. But a deal for United Airlines to order 200 MAX 10 in June encouraged Boeing to set the bar higher, driving up the offer for Ryanair, market sources said.

With hundreds of MAX yet to be delivered after the grounding and COVID-19 crisis, sources say Ryanair believes prices should be set lower than previous MAX 10 offers, but the planemaker has drawn a line on the grounds that it would be uneconomic to produce and industry sources say the talks remain deadlocked.

Boeing declined comment on confidential talks. A Ryanair spokesman said it had nothing to add to O’Leary’s comments.