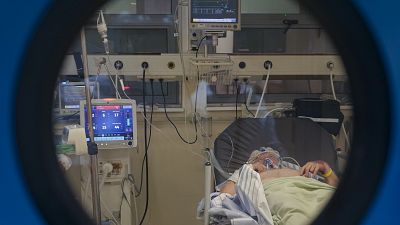 Coronavirus daily cases continue to surge in some European countries while governments are still resisting re-imposing restrictions such as mandatory mask-wearing and remote working.

In the UK, pressure is increasing on hospitals as the number of new COVID-19 cases each day continues to be around the 40,000 mark.

Attending the World Health Summit in Germany, WHO chief Tedros Adhanom Ghebreyesus did not mince his words over how the pandemic is generally being handled.

Meanwhile, Romania has looked to Europe to fight its low vaccine take-up.

'Vaccine roll-out is not enough' in the UK

The government said it is putting its faith in its vaccination programme.

Saturday did see a record number of people getting booster jabs – 325,000 – but experts warn the vaccine roll-out on its own is "not enough".

"We do need to have people using lateral flow tests, avoiding contact with large numbers of people in closed spaces, using masks, all of those things now need to happen if we are going to stop this rise and get things under control soon enough to stop a real meltdown in the middle of the winter," Professor Adam Finn, from the UK's Joint Committee on Vaccination and Immunisation (JCVI), told Euronews.

WHO chief denounces bad handling of the pandemic

"The pandemic will end when the world chooses to end it," said Tedros Adhanom Ghebreyesus at the World Health Summit in Germany on Sunday.

The WHO chief did not mince his words over how the pandemic is generally being handled, adding "it is in our hands, we have all the tools we need: effective public health tools and effective medical tools".

He renewed his calls for a more equitable distribution of vaccines but noted with regret that "the world has not used these tools wisely", stressing that with "nearly 50,000 deaths per week" worldwide, "the pandemic is far from over".

According to AFP, COVID-19 has killed at least 4.9 million people worldwide since the end of December 2019.

These figures are based on the official daily death tolls for each country, excluding upward revisions made after the report by some statistical agencies.

Taking into account excess deaths related to the coronavirus, WHO estimates that the overall toll of the pandemic could be two to three times higher than officially reported.

Romania looks to Europe for help

In Romania, only 35 per cent of adults are fully inoculated against COVID-19 compared with an EU average of 74 per cent.

The country of around 19 million people is the second-least vaccinated nation in the 27-nation bloc.

Romania has reported more than 1.5 million cases of the coronavirus, including at least 44,000 deaths since the pandemic began.

In response to the country's low vaccine take-up, the government activated the EU Civil Protection Mechanism, a system aiming to strengthen cooperation between the EU member states to improve prevention, preparedness and response to disasters.

Fellow EU members have sent much-needed equipment and medicine to help Romania amid its COVID-19 surge.

A surge in COVID-19 infections in Russia has prompted the Kremlin to impose new restrictions from this week.

More than 37,900 new confirmed cases have been recorded in the last 24 hours, the highest since the start of the pandemic.

The government has blamed the latest spike in infections and deaths on low vaccination rates and lax public attitudes toward taking precautions.

From Saturday, Russians have been ordered not to go to work as the country will observe an extended holiday.

Gyms, culture venues, and most shops will be closed in the capital Moscow, on Thursday.

Slovakia has extended its tight coronavirus restrictions to more parts of the country following the latest surge in infections.

Hotels, bars, and restaurants are now closed in ten regions, and facemasks are mandatory both indoors and outdoors.

Elsewhere, citizens in Estonia can no longer use negative test results to obtain a digital health pass.

As of Monday, only those fully vaccinated or recently recovered from COVID-19 are allowed to enter cinemas and sporting venues. Another rule requiring facemasks indoors will also remain in place until January.

The Dutch government is also seeking advice from a panel of experts on whether it needs to reintroduce COVID-19 restrictions.

Health Minister Hugo De Jonge told reporters in The Hague that hospital admissions are rising faster than anticipated when the country relaxed its lockdown last month.