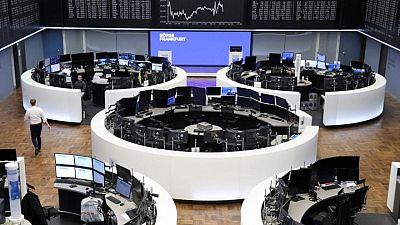 -European stocks steadied at six-week highs on Thursday, as buying of defensives and growth stocks helped offset losses in miners and disappointing earnings forecasts, including from software major SAP.

Sentiment was also subdued by renewed concerns about China’s property sector after the collapse of a $2.6 billion asset sale at indebted developer China Evergrande Group.

After declining as much as 0.6%, the Europe-wide STOXX 600 index ended down 0.1% at 469.71. A European equity strategist at Bank of America had earlier this month set a year-end target of 420 for the STOXX 600, implying a fall of about 10% from current levels.

European miners, which have a large exposure to China, shed 3.0% as iron ore and base metal price plunged. [MET/L] [IRONORE/] UK-listed shares of Anglo American fell 2.7% even though it reported a 2% rise in overall production in the third quarter.

“Mining stocks have been unable to shake investor concerns sparked by yet another twist in the Evergrande saga,” said Danni Hewson, a financial analyst at AJ Bell.

Company after company has warned that supply issues and price hikes aren’t going to be a flash in the pan and are going to impact earnings going forward, AJ Bell’s Hewson said.

Europe’s most valuable tech company SAP dropped 3.2% and was the biggest drag on the STOXX 600 despite positive third-quarter results as traders were unimpressed by the company’s outlook, particularly its licensing forecast.

Swiss engineering and tech group ABB tumbled nearly 6.2% after it lowered its full-year sales forecast and warned of shortages of components, while Sweden’s AB Volvo fell about 0.4% after it said chip shortages hampered production of its trucks.

There was no relief for banking stocks either. The sector fell 0.4% even though UK’s Barclays and Finland’s Nordea reported upbeat quarterly results.

Spain’s lender-heavy IBEX index slipped 0.8%, the most among regional peers, after downbeat earnings at Bankinter weighed.

Defensive sectors such as personal and household goods index rose 0.8% on the back of Unilever’s third-quarter earnings beat.

Cartier-owner Richemont advanced 0.4% after HSBC raised the brand to “buy” from “hold”, citing its leadership and momentum in the jewellery industry.