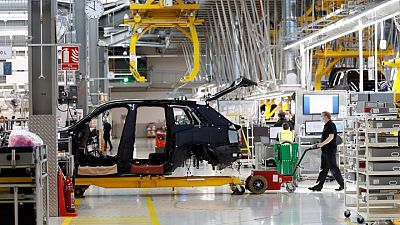 LONDON -British manufacturers raised prices by the most since 1980 over the past three months as they sought to pass on rapidly rising costs for raw materials and manage acute labour shortages, a long-running survey showed on Thursday.

The figures from the Confederation of British Industry are likely to fuel concerns at the Bank of England that short-term inflation pressures risk getting entrenched and could force it to start raising interest rates as soon as next month.

Supply-chain bottlenecks have hit economies worldwide as they begin to emerge from the COVID-19 pandemic, but Britain has been harder hit due to new post-Brexit barriers to trade and immigration that took effect at the start of this year.

Thursday’s quarterly CBI survey showed manufacturers raised prices at the fastest rate since April 1980 in the three months to October. Expectations for price growth in the coming quarter also rose to their highest in more than 40 years.

Costs faced by manufacturers rose at the fastest pace since 1980 in the three months to July and slowed only slightly in the latest quarter. The survey’s gauge of cost expectations for the quarter ahead rose to its highest since 1977.

Supply-chain bottlenecks mean manufacturers are reporting the lowest-ever level of stocks, and the proportion reporting that a shortage of skilled labour is holding back activity is its highest since 1974.

Last month the BoE warned inflation was likely to rise above 4% at the end of this year and stick there until the second quarter of 2022, largely due to a surge in natural gas prices that has hit manufacturers and consumers alike.

Energy prices have risen further since, and investors are betting the BoE will become the first major central bank to raise interest rates on Nov. 3 after its next meeting.

The picture for demand is more mixed. The CBI data showed the rate of growth in orders slowed in October to its lowest since April as well as a big fall in optimism.

Rising COVID-19 cases, the end of the government furlough programme and a higher cost of living mean many economists think consumer demand is set to weaken – and also that the BoE will defer a rate rise until early next year.

But the quarterly figures from the CBI still show better-than-average optimism among manufacturers, alongside expectations that demand will pick up and that output will continue to grow at an above-average pace.