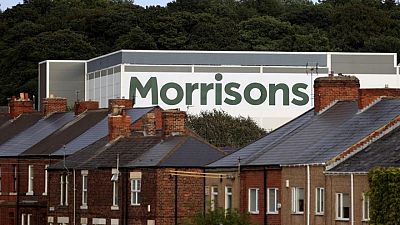 Here is a timeline of the six-month battle for the grocer.

Morrisons agrees to a 6.3 billion pound offer from a consortium led by SoftBank-owned Fortress Investment Group. It emerges Fortress made an initial approach in early May.

Scheme document outlining Fortress’ offer is published and Aug. 16 set for Morrisons’ shareholders to vote on the offer. UK Takeover Panel gives CD&R until Aug. 9 to announce a firm intention to make an offer or walk away.

Morrisons investor M&G says Fortress offer does not reflect the value of the group.

Morrisons agrees to an improved offer worth 6.7 billion pounds from Fortress consortium and adjourns until Aug. 27 a shareholder meeting to vote on the offer.

Morrisons agrees to a 7.0 billion pound (285 pence a share) offer from CD&R and drops the Fortress recommendation. Fortress says it is “considering its options”. Morrisons says Aug. 27 shareholder meeting will instead be held around week starting Oct. 4.

Morrisons shareholder Legal & General says it believes the true value of the supermarket group should be realised following CD&R’s sweetened bid, with more attention now being paid to its property assets.

Morrisons’ pension schemes warn a takeover by either CD&R or Fortress could “materially weaken” the security of the schemes if no additional protection is agreed.

Morrisons says scheme document for CD&R’s offer to be published on or around Sept. 11. It says shareholder meeting to vote on CD&R offer will be held on or around Oct. 5.

Morrisons says it is in talks with CD&R, Fortress and the Takeover Panel over an auction process. It says scheme document for CD&R’s offer to be published around Sept. 25, with a shareholder meeting around Oct. 18.

Takeover Panel says auction will be held on Oct. 2.