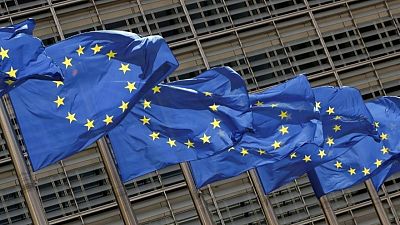 Recent comments from European Central Bank officials including ECB chief Christine Lagarde have soothed concern in debt markets that the central bank is likely to tighten policy soon in the face of higher inflation.

But a hawkish shift from other major central banks such as the U.S. Federal Reserve and the Bank of England prompting investors to ratchet up bets for early rate hikes continues to dominate market moves and feed into euro area bonds, where yields rose following their first fall in eight weeks last week.

Money markets now fully price a 10-basis-point rate hike from the ECB in October 2022, a move analysts say is unwarranted given the ECB‘s inflation projections.

Bank of England Governor Andrew Bailey brought the hawkish shift back into focus on Sunday, when he said that the British central bank is gearing up to raise rates for the first time since the onset of the coronavirus crisis as inflation risks mount. British gilt yields rose.

Germany’s five-year bond yield rose to the highest since March 2020 at -0.445% and was last up nearly 6 bps in the biggest daily yield jump since February this year.

Yields on 10-year Italian government bonds rose more than 3 bps to 0.9%, after hitting their highest since late May at 0.954%. The spread they pay on top of German peers hit the highest in 10 days at 106 bps.

Market gauges of inflation expectations also rose, with a key euro area measure rising to 1.9122%, the highest since September 2014.

The Financial Times reported that the ECB is expected to discuss boosting its purchases of supranational debt – which would include the debt the European Union is issuing to back its up-to 800 billion euro coronavirus recovery fund.

Nonetheless, yields on bonds from the EU and the European Investment Bank – the bloc’s other key supranational borrower – were mostly higher on the day, in line with moves in the government bond market.

The higher commodity prices and supply disruptions which are pushing up inflation in the euro zone are transitory but may last well into next year, ECB policymaker and Italian central bank governor Ignazio Visco said on Monday.