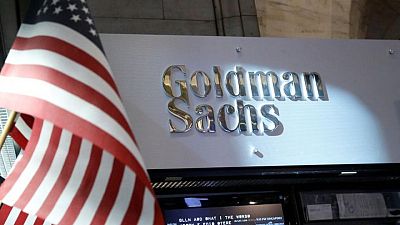 The bank posted profits of $5.28 billion up from $3.23 billion a year ago, capping a stellar quarter for Wall Street lenders which have benefited from a rebounding U.S. economy, volatile equity markets and a global deal-making bonanza.

Shares of Goldman Sachs were up 2% in mid-morning trading.

Global M&A volumes have shattered all-time records, with deals worth over $1.5 trillion inked by the world’s biggest investment banks in the third quarter, according to Refinitiv data.

Goldman comfortably held its top ranking on the league tables for worldwide M&A advisory, according to the Refinitiv data which ranks financial services firms on the amount of M&A fees they generate.

Those surging M&A fees drove Goldman Sachs’ overall financial advisory revenue up 225% to $1.65 billion, while underwriting revenue, which has been boosted by a rush of private companies looking to go public, surged 33% to $1.90 billion.

All told, Goldman’s investment bank boasted its second-best quarter ever, with total revenue of $3.70 billion, and executives said they expect revenues to continue to be strong.

Earnings per share were $14.93 from $8.98 a year earlier, outstripping the $10.18 per share analysts had predicted, according to the IBES estimate from Refinitiv.

Goldman’s global markets business, which now houses the trading business and accounts for roughly 41% of overall revenue, reported revenue of $5.61 billion, up 23%.

Along with its rivals, Goldman also cashed in as companies rushed to refinance debt and sell new stock, while volatility in global equities markets, driven by worries over central bank policy tightening, kept trading desks busy during the quarter.

The bank’s equity trading revenue more than doubled from last year to $3.1 billion. That was higher than rival Morgan Stanley, which reported trading revenue of $2.87 billion and is typically number one in this line of business.

Rival Morgan Stanley said on Thursday that its third-quarter profit rose 38%, while JPMorgan Chase & Co reported a 24% rise. Citigroup Inc. and Bank of America Corp, which were likewise buoyed by deal fees and equities trading, increased profits by 48% and 64%, respectively. All the banks handily beat estimates.

Unlike JPMorgan, Citigroup and Bank of America, which have sizable consumer banks, Goldman is heavily reliant on its trading business and investment bank.

Goldman’s consumer business, though small, has been key to its diversification strategy.

As part of Chief Executive David Solomon’s strategy to build alternative revenue streams, Goldman is now doubling down on Marcus, its consumer bank.

Since taking over from Lloyd Blankfein in 2018, Solomon has looked to diversify revenue, with more focus on consumer banking, mass-market wealth management and cash management.

Total loans increased 28% to $143 billion in the quarter from a year earlier, a strong result in a mixed quarter for loan growth across Wall Street.

JPMorgan said on Wednesday that loans were up 5% across the bank compared with last year, while Citi was broadly flat.