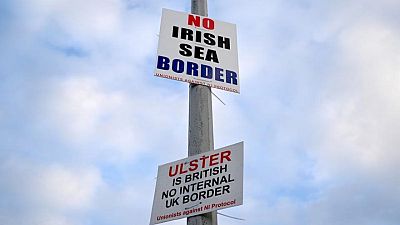 BRUSSELS – The European Union proposed measures on Wednesday that could halve customs paperwork required to move goods from Britain to Northern Ireland and cut checks on food imports by 80%.

Northern Ireland remains in the EU single market despite Brexit because of its open border with EU member Ireland. This has snagged trade between Northern Ireland and the rest of the United Kingdom and Britain says the arrangement does not work.

The following are details of the four-part package that will be put to Britain, which is demanding a more extensive overhaul:

The European Union has a series of SPS (sanitary and phytosanitary) rules to protect animal, plant or public health that dictate what food products can be imported and how.

Imports of meat, dairy produce and fresh fruits and vegetables need to be accompanied by health certificates, while imports of minced meat and ‘meat preparations’, such as sausages or burgers, are banned outright, unless they are frozen.

Since Northern Ireland is in the EU single market, the same rules apply for imports of such products from Britain.

After the expiry of an unspecified grace period, supermarkets would no longer be able to supply their Northern Irish stores with products such as sausages coming from Britain and would need health certificates for other agri-food products.

The EU plan is designed as a Northern Ireland-specific arrangement, that could reduce physical checks by 80% – for a range of products found on supermarket shelves there, such as Cumberland sausages.

In return for fewer checks, the EU would want more market surveillance and reinforced monitoring of supply chains to ensure the goods in question are only going to Northern Ireland.

In future, a truck bringing, for example, 100 different types of food, would require just one certificate stating the various goods, rather than 100. Imports of products of animal origin will no longer be subject to the same level of checks.

British goods entering Northern Ireland that are considered to be “at risk” of entering the single market can face extensive customs paperwork. Imports by small Northern Irish manufacturers or suppliers of retail goods in Northern Ireland are exempt.

The EU plan would extend this exemption from lengthy paperwork to manufacturers with a higher turnover and to suppliers based in mainland Britain.

So a Northern Irish car dealer importing car parts from Great Britain would only need to provide basic information, such as the invoice value and parties to the transaction, for customs purposes, rather than a full-set of customs code information.

The EU believes this will cut customs paperwork by over half. Taken with the SPS changes, there would be a form of “express lane” to facilitate the movement of goods.

The British Generic Manufacturers Association says the extra warehousing, lab testing and technical specialists will make supplying Northern Ireland unviable in many cases, potentially leading to the withdrawal of 2,000 medicines.

Most of Northern Ireland’s medicines come from Britain, with generics seen as most threatened due to their low margins, when a grace period expires at the end of the year.

Under the EU proposal, regulatory functions could continue to take place in Great Britain, which could remain a hub of generic drug supply, and they would not have to relocate infrastructure to Northern Ireland.

In the fourth paper, the EU sets out plans to improve the exchange of information with Northern Irish authorities, businesses and society to make the application of the protocol more transparent.