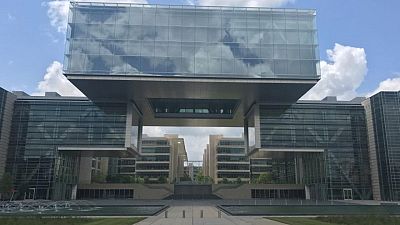 The visually stunning complex, sometimes compared to Apple’s ring and Alphabet’s Googleplex campuses, opened in 2014 as Exxon stood atop of the global oil market. Its centerpiece is a giant cube that appears to float above the office and research facility.

The cube has become the emblem for a wrenching staff exodus and Exxon’s financial fall. Hundreds of departing employees this year have posted images on social media of them standing in front of it on their last day of work, and versions have spread among Exxon facilities worldwide.

A historic, $22.4 billion loss last year fueled the departures of thousands of employees. Cost-cutting will pare 14,000 jobs by year-end, and this year’s job review has led to voluntary and forced departures – accompanied by the social media postings of the cube.

“You should scan social media and find all the people who are excited to be joining ExxonMobil,” Exxon spokeperson Casey Norton told Reuters. Restructuring cuts finished last December and any positions opened this year due to performance-related dismissals may be refilled, he said.

“That picture will always remind me of the positive experiences I had,” said former Exxon finance supervisor Jason Crawford, who posted his own three weeks ago. He resigned after concluding that top management was ill-prepared for challenges ahead and Exxon’s “days of being a global leader are long behind them.”

The cube was designed to showcase Exxon’s engineering and technology prowess. A feat of engineering, it looms over the 385-acre campus, floating over an open courtyard and reflecting pools.

Officially called Exxon Energy Center, it opened in 2014 at a time the firm was atop the global oil and gas market. Oil was selling for $100 a barrel and Exxon’s market value, now about $258 billion, approached half a trillion dollars.

The building initially provided a symbol of Exxon’s high-tech ambitions for itself and a lure for talented engineers then flocking to high-tech companies. The campus has walking paths that wend through the area, restaurants, a gym with trainers, and physical science laboratories.

Avery Smith, who posted his photo in front of the cube earlier this year, was one of those drawn to the complex. The 26-year-old data scientist worked at Exxon Mobil Research & Engineering and left last January to start Snow Data Science.

Exxon’s “rigid culture” limited the projects he wanted to pursue and its pandemic work-from-home restrictions grated on him. “I was a little trapped in my position and wanted to do bigger projects,” Smith said, choosing to launch his own enterprise.

The cube represents the company at its best, said Smith and others who posted their cube portraits.

“I was challenged to work with people all over the world,” wrote engineer Margaret Webb, with assignments “tackling some of the largest problems in the world today.”

Although she left Exxon in February “before this trend became popular,” Webb recently felt compelled to add hers after seeing hundreds materialize from colleagues.

“The biggest thing I take away is this – something needs to be done about how engineers consider the ethical, social and environmental impacts of their daily work,” she wrote.

Cube references now appear in goodbyes far from Texas. An Exxon scientist in Calgary, Alberta, built a Cube replica from Legos for his goodbye image. A Buenos Aires, Argentina, finance supervisor drew on a photo from a prior visit for his.

“I don’t have the customary energy cube picture,” lamented Krishnan Kumaran, 55, who last month took early retirement after 18 years at the company. His goodbye included “a picture of the (Exxon) building located in pastoral Clinton, New Jersey,” where he worked as a computational scientist.