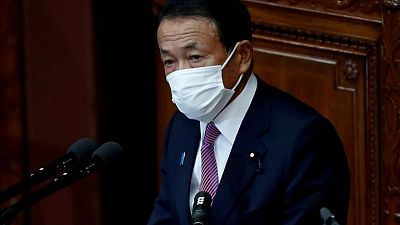 TOKYO – Japan’s outgoing finance minister, Taro Aso, said on Monday he had proposed lowering the central bank’s 2% inflation target when prices took a hit from plunging oil prices from 2014 through to 2015.

Aso, who was finance minister for nearly nine years, said the oil price slump was among the main reasons the government could not officially declare an end to deflation.

“I proposed to Governor Kuroda that with oil prices falling this much, it would be hard to achieve 2% inflation, and that the target must be lowered at some point,” Aso said in his final news conference as finance minister, referring to Bank of Japan (BOJ) chief Haruhiko Kuroda.

“But the governor said he would do his best to achieve the target,” Aso said, adding that policymakers must “scrutinise at some point” why the BOJ‘s inflation target of 2% has not been met.

The remarks highlight how the government and lawmakers distanced themselves from the BOJ‘s target years ago, despite central bank reassurances that achieving the target was possible by maintaining or increasing stimulus.

Aso was deeply involved in negotiations with the BOJ when the central bank – under political pressure to take a stronger stand against deflation – reluctantly set a 2% inflation target in January 2013 under former BOJ Governor Masaaki Shirakawa.

After Kuroda took over as governor, he deployed a massive asset-buying programme in April 2013 to pull Japan out of deflation. But the wall of money and several additional easing steps since then have failed to push up inflation.

While Aso supported the BOJ‘s stimulus efforts as a member of the cabinet, he has repeatedly voiced doubts that monetary policy alone can reflate the economy out of the doldrums.