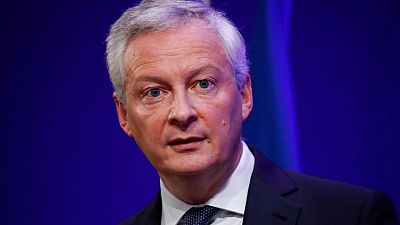 PARIS – The French government called on Thursday for a review of the European gas and power markets to shed light on a current price spike and come up with a coordinated European response.

Finance Minister Bruno Le Maire and Environment Minister Barbara Pompili made the appeal in letter to Paschal Donohoe, the head of the Eurogroup of euro zone finance ministers.

So far European governments that have responded to the surge in energy prices have focused their efforts on alleviating the pain for consumers.

The French government plans to increase subsidised vouchers to help poor households cover their energy bills and Prime Minister Jean Castex was due to announce additional measures later on Thursday.

Urging better coordination among EU countries, Le Maire and Pompili said wider measures should not be ruled out, without specifying what. In the short term market supervisors should also conduct a “thorough review” of energy markets to improve their transparency, they added.

They also said in the letter, seen by Reuters, that the functioning of the EU gas market should be investigated “to understand why current gas contracts have been insufficient to ensure comfortable gas availability in Europe.”

Le Maire told a hydrogen industry conference earlier on Thursday that he could not idly stand by as French electricity prices tracked a spike in gas prices even though France generates 70% of its power production from nuclear plants.

The two ministers said that ultimately the EU needed to diversify its energy supply and reduce dependency on gas-exporting countries as fast as possible.

“We did not build our country’s energy dependence for decades around nuclear energy only to get squeezed by (Russian President) Vladimir Putin,” Le Maire said earlier at the conference.