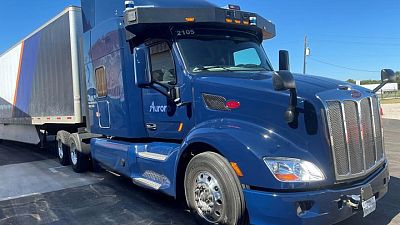 PALMER, Texas – Self-driving startup Aurora says it has discovered a path to turn costly self-driving vehicles into a profitable business, showcasing its technology to investors this week ahead of a public listing it hopes will provide some $2 billion in additional funding.

The move comes as several autonomous trucking companies prepare to launch driverless routes in the coming years and begin signing up industry partners and customers in an effort to turn long-elusive self-driving into a profitable reality.

Unlike some of its competitors, Aurora wants to provide both autonomous freight trucking and robotaxi services, saying the combination will lower costs, provide greater revenue streams and allow technology transfer.

“Trucking allows us to build a profitable, scalable business that funds the further development of ride-hailing and brings down the cost of hardware,” Sterling Anderson, Aurora’s co-founder and chief product officer, said in an interview. He spoke at the company’s South Dallas truck terminal, where investors, analysts and journalists rode in one of its autonomous highway trucks with two safety drivers in place.

Autonomous vehicle (AV) companies have yet to generate significant revenue although investors have poured billions into their development.

Trucking has emerged as the most immediate opportunity to commercialize AVs, fueled by growth in e-commerce and a shortage of drivers.

Drivers currently account for more than 40% of per-mile costs and can drive no more than 11 hours per day – restrictions that do not apply to automated trucks.

Aurora, which plans to go public this year through a merger with blank-check firm Reinvent Technology Partners Y at a pro-forma market capitalization of $13 billion, has projected breaking even in 2027, but Anderson declined to specify how soon the company expects to earn a net profit.

It plans to launch fully driverless trucks at the end of 2023, with robotaxis to follow a year later.

Anderson said its ride-hail business would initially focus on high-margin airport and business-district trips that do not require robotaxis to navigate complex urban environments.

But the four-year-old Bay Area firm faces fierce competition from well-funded startups including Alphabet Inc’s Waymo, Argo which is backed by Ford Motor Co and Volkswagen AG, and Cruise, which is majority-owned by General Motors Co. It also faces competition from Chinese startup TuSimple, which went public in April.

(This story changes second, third and fourth references to Sterling Anderson to Anderson instead of Sterling, paragraphs 10, 12 and 14)