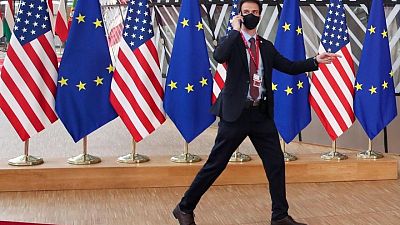 By David Lawder and Nandita Bose

The U.S.-EU Trade and Technology Council opened its first meeting in a former steel mill building in southeast Pittsburgh that has been repurposed as a research and development center for artificial intelligence (AI), robotics and advanced manufacturing.

The meeting was nearly derailed by French anger over a U.S. decision this month to supply Australia with nuclear submarines, which prompted Canberra to scrap a $40 billion submarine contract with France.

But EU governments backed a joint declaration to strengthen semiconductor supply chains expected from the meeting that says the bloc and the United States share mutual supply dependencies in the near term, although a reference to a second TTC meeting in the first quarter of 2022 was dropped.

Reuters was first to report https://www.reuters.com/technology/exclusive-us-eu-look-work-more-closely-regulating-big-tech-summit-2021-09-23 a draft of the statement on joint U.S.-EU actions, including taking a more unified approach to limit the growing market power of Big Tech.

With the U.S. and Europe trying to restrain the growing power of American tech giants such as Alphabet’s Google, Facebook, Apple and Amazon.com Inc, such cooperation has become critically important for regulators on both sides of the Atlantic. It also would make it harder for the U.S. tech industry to fight new rules.

The council has 10 working groups and will discuss areas such as chip shortages, artificial intelligence (AI) and tech competition issues.

Several tech trade groups in Washington said the industry does not want the European approach to digital regulation to be adopted in the United States.

“It is critical for U.S. negotiators to vigorously defend U.S. economic interests in the TTC,” the Information Technology & Innovation Foundation said in a statement https://itif.org/publications/2021/09/13/advancing-us-goals-us-eu-trade-and-technology-council. “They should not gloss over real differences in privacy rules, AI regulation, antitrust regulation, digital taxation, content moderation, and others.”

On Tuesday, Dombrovskis told reporters the United States and the EU share many goals for AI, such as curbing its use for surveillance and repression, but the TTC will help where the two sides differ.

Dombrovskis said the EU was ready to look at similar arrangements agreed by Canada and Mexico that lifted U.S. tariffs on their steel and aluminum exports to the United States in 2019, but added that a deal needed to be agreed by early November.

Raimondo, whose agency implemented the U.S. metals tariffs, has said a focus for the meeting was discussing with European allies ways to restrain China’s non-market behavior, including dumping underpriced steel into U.S. and European markets.