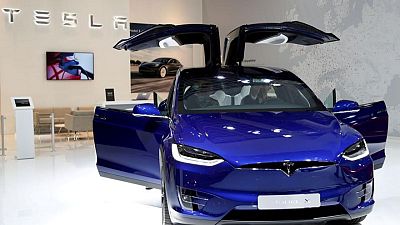 – Wall Street analysts gave upbeat estimates for Tesla’s quarterly vehicle deliveries on Tuesday, with one research group predicting it to be the best quarter for the company even as the auto sector wrestles with an unprecedented shortage of parts.

The electric-car maker had flagged an unusually high end-of-quarter wave of deliveries in a staff memo earlier this month, when Chief Executive Elon Musk asked employees to “go super hardcore” to make up for production challenges early in the third quarter.

Analysts at Piper Sandler and RBC raised their estimates to about 233,000 vehicle deliveries for the third quarter ending Sept. 30, while Credit Suisse’s estimate was 225,000-230,000.

The figures represent a 65%-67% jump from a year earlier. As of Monday, analysts on average expected 222,700 Tesla vehicle deliveries for the third quarter, according to market data provider Visible Alpha data.

Analysts have also said the impact of the global semiconductor shortage, which has crippled many automakers around the world, may have been smaller on Tesla.

“Tesla appears to have been less impacted by the shortage than other (automakers),” Credit Suisse’s Dan Levy said in a report, citing its “quick pivot” to new microcontrollers and writing its own vehicle software.

The third quarter will likely be Tesla’s “strongest” ever, Piper Sandler’s Alexander Potter said, noting increasing adoption of electric vehicles in Europe and China and Tesla’s rising market share. Potter has a five-star rating for estimates and recommendations on Tesla, according to Refinitiv Eikon.

China’s role as a source of global exports for Tesla is growing, with its Shanghai plant having likely exported about 55,000 vehicles in July-August, up from roughly 30,000 in the second quarter, Credit Suisse’s Levy said.