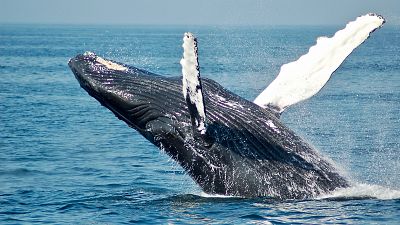 The "whales" in this case are large financial institutions and not the oceangoing mammals   -   Copyright  Todd Cravens / Unsplash
By Tom Bateman  •  Updated: 29/09/2021

Europe is now the world's biggest cryptocurrency economy, with the continent receiving over €870 billion in crypto in the past year.

The United Kingdom saw the largest volume of cryptocurrency trading in the CNWE region, at around €145 billion. The UK was followed by France, Germany, the Netherlands and Spain.

At the same time as crypto transaction volumes in Europe began to increase in mid-2020, volumes in East Asia - the previous world cryptocurrency capital by transactions - entered a steep decline.

"CNWE’s cryptocurrency economy began growing faster in July 2020. At this time, we saw a huge increase in large institutional-sized transactions, meaning transfers above $10 million (€8.5 million) worth of cryptocurrency," the Chainalysis report said.

The firm's data shows how significant that growth has been. In July 2020, large institutional transfers totalled around €1.2 billion. By June 2021, that figure had ballooned to €39.6 billion, at which point the whales accounted for over half of all crypto transfer volume in the CNWE region.

The majority of large institutional transactions in Europe went to DeFi, or "decentralised finance" platforms, the report found.

DeFi platforms have been embraced by large investors as they offer ways to stake cryptocurrencies, essentially allowing long-term holders to make money from interest payments by lending their cryptocurrency to DeFi protocols.