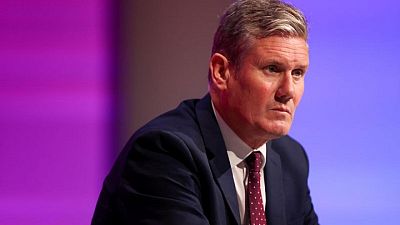 LONDON – Opposition Labour leader Keir Starmer accused the government on Tuesday of leading Britain “from crisis to crisis”, saying it should offer key workers priority at the petrol pumps to ease a fuel crisis ministers had failed to plan for.

At his party’s annual conference in the southern English seaside town of Brighton, Starmer told broadcasters he wanted to show where “the future of our country lies” by presenting an agenda he hopes will replicate some of the centre-left’s successes elsewhere in Europe at the next election.

Labour, which has narrowed its gap in the opinion polls with the governing Conservative Party, feels it needs to get its house in order before the next election, which some party officials say could be called earlier than the 2024 deadline.

On Tuesday, Starmer used interviews with broadcasters to take aim at the government, which has failed so far to stop petrol pumps running dry after a shortage of truck drivers to deliver the fuel prompted many consumers in Britain to panic buy.

“The government has reduced the country to chaos as we track from crisis to crisis and the government is not gripping this,” he told BBC News.

“What I would do is give priority to key workers this week.”

Starmer has been criticised by some in the party for concentrating on internal matters during the five-day conference, spending time and energy on changes to the rules to elect leaders rather than targeting the government.

The government’s appeals to drivers not to panic buy fuel have so far failed; dozens of forecourts were closed with signs saying they had no petrol or diesel and some people sat for hours in queues, Reuters reporters said, although the government said the situation appeared to be easing.

Starmer said he would not only hand priority to medics, healthcare staff and other essential workers to fill their cars, but would also issue enough visas for lorry drivers from outside Britain for a long enough period to make a difference.

The government on Sunday announced a plan to issue temporary visas for 5,000 foreign truck drivers.

“The prime minister should take that action today, prioritise key workers and start issuing enough visas and for long enough,” he said.