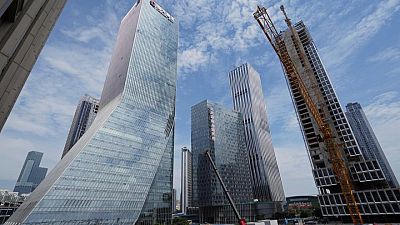 SHANGHAI – The Shenzhen government is investigating a unit of Chinese developer Evergrande, the city’s financial regulator told investors on Monday, in the first sign of an official inquiry into the wealth management crisis at the real estate giant.

Evergrande, the world’s most indebted property developer headquartered in Shenzhen, owes $305 billion and has run short of cash, triggering concerns its problems could ripple through China’s financial system.

As its liquidity crisis deepened, the company’s wealth arm earlier this month missed a payment on wealth management products (WMPs), leading to protests by investors who fear they will never get their money back.

In a letter to investors seen by Reuters, the Shenzhen Financial Regulatory Bureau said “relevant departments of the Shenzhen government have gathered public opinions about Evergrande Wealth and are launching a thorough investigation into related issues of the company”.

It is also urging China Evergrande and Evergrande Wealth to work to repay investors, the letter said, which was sent following investor demands for an inquiry.

Neither Evergrande, nor the government of Shenzhen replied to requests seeking comment.

China Evergrande, in common with other heavily-indebted conglomerates, issued high-yielding WMPs to investors – a popular way of borrowing that sidesteps government lending restrictions.

More than 80,000 people – including Evergrande employees, their families and friends as well as owners of Evergrande properties – bought WMPs through Evergrande that raised more than 100 billion yuan ($15.47 billion) in the last five years, and some 40 billion yuan of the investments are outstanding, a sales manager of Evergrande Wealth and investors said. [L4N2QM1U0]