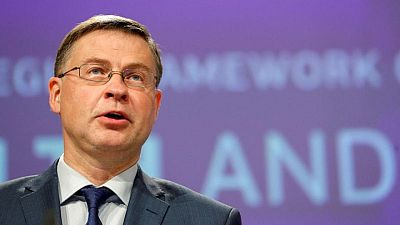 WASHINGTON – The United States needs to work with the European Union to reform the World Trade Organization rather than let it decline through neglect, the EU trade chief said on Monday,

“We need reform, not ruin,” European Commission vice-president Valdis Dombrovskis said in a speech at John Hopkins University at the start of a week of talks with U.S. counterparts in Washington.

Consigning the WTO to “benign neglect”, Dombrovskis said, would be to lose one of the most important tools to advance open and fair trade. It was a choice, he said, between order and the law of the jungle.

The WTO could not address these challenges in its current form, the commissioner said, insisting the reform process needed to start at the WTO‘s ministerial conference on Nov. 30-Dec. 3.

The EU stood ready, Dombrovskis said, to work with the United States to reach agreements on fishery subsidies, health, agriculture and sustainability and to start a serious discussion on institutional reform.

“If we do not act in concert, we leave the playing field open for non-market economies to do as they please in a global free-for-all,” Dombrovskis said. “I believe that with strong engagement and joint leadership, we can really reinvigorate the WTO.”