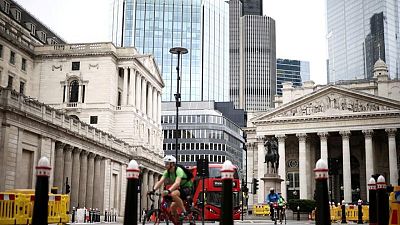 By Huw Jones and Carolyn Cohn

LONDON -A cap on how much pension funds can invest in less liquid assets should be scrapped to encourage longer-term investing that helps the British economy recover from COVID-19 and meet climate goals, a UK-government backed report said on Monday.

DC schemes face a cap of 35% for investing funds into less liquid assets, one of the most significant barriers to schemes that may want to increase such investments, the report chaired by the Bank of England, the Financial Conduct Authority and Britain’s finance ministry said.

It wants more consolidation among DC schemes, many of which are small, making it harder to negotiate the best deals from investing in illiquid assets.

DC funds put most of their money in stocks and bonds that offer daily redemptions to investors, making it harder to build scale over time, the report said.

“Greater investment in longer-term productive UK assets, such as research and development, technology, and infrastructure can provide a boost to long-term growth and support an innovative, greener future for the UK.”

Two-thirds of DC schemes don’t invest in illiquid assets, with those that do mainly in real estate and falling far short of the 35% cap.

Removing the cap would also end accompanying red tape that has put off funds from investing in illiquid assets.

The report is a first step, identifying barriers to help begin the lengthy process of changing the sector’s mindset towards illiquid assets.

Britain is due to launch a new Long-Term Asset Fund (LTAF) for holding illiquid assets in open-ended funds without the need to offer daily redemptions.

Investor platform interactive investor said the report’s roadmap presents more problems than solutions due to being short on detail. “There’s no magic wand that can entirely solve the shortcomings of the open-ended fund structure for investing in illiquid assets,” it said.