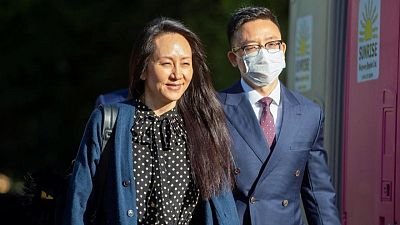 WASHINGTON – Huawei Technologies Chief Financial Officer Meng Wanzhou and U.S. prosecutors are expected to appear in court to say they have reached an agreement to resolve charges against her, according to a source familiar with the matter, concluding a process that should allow her to leave Canada.

Meng is expected to appear virtually in a hearing in Brooklyn federal court, according to a source. She was arrested at Vancouver International Airport in December 2018 on a U.S. warrant after being indicted on bank and wire fraud charges for allegedly misleading HSBC about Huawei’s business dealings in Iran.

Here are some facts about Meng.

Meng – who also goes by her English names, Cathy and Sabrina, according to the New York Times – is the daughter of Huawei founder Ren Zhengfei and has been referred to as the “Princess of Huawei” by state media. She was born in Chengdu, in China’s southwestern Sichuan province and earned a master’s degree in accounting from the Huazhong University of Science and Technology, according to the Guardian. She also worked for the China Construction Bank before joining her father’s business in 1993, the British paper added.

Meng, who has maintained her innocence and is fighting extradition, is confined to Vancouver and monitored 24/7 by private security that she pays for as part of her bail agreement. Neighbors in the wealthy area where she is residing while fighting extradition include the U.S. consulate general, according to the Guardian. She is confined to the home by night but is free to move about until 11 pm, according to the CBC, which reported that she has received visits from her husband and two children.

Following Meng’s arrest, China detained two Canadians, sentencing one in August to 11 years in prison for espionage, in a move widely seen as retaliation. Her detention is seen as politically motivated in China. The perception was bolstered by remarks made by former President Donald Trump in an interview with Reuters, in which he suggested that he would intervene in the U.S. Justice Department’s case against Meng if it would serve U.S. national security interests or help clinch a trade deal with China.

Meng, 49, is the daughter of Ren’s first wife. Meng’s half- sister, Annabel Yao, born to Ren’s second wife, is 25 years younger and caused a sensation with her coming out at the Le Bal des Debutantes in Paris just weeks before Meng was detained, according to Vogue and the South China Morning Post.

Meng can often be seen leaving her house for a court appearance in tailored business dresses that reveal a monitoring device hooked to her ankle.