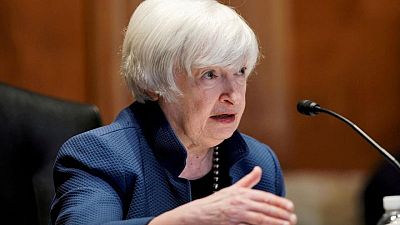 WASHINGTON – Regulators globally are cracking down on cryptocurrencies, alarmed at a rapidly expanding market that exceeded a record $2 trillion in April. China on Friday said it was banning all crypto trading and mining, sending digital coins tumbling.

In the United States, President Joe Biden’s regulators have launched several efforts to rein in cryptocurrencies. Here’s the breakdown:

The group traditionally includes the Treasury Department, Federal Reserve, Securities and Exchange Commission (SEC) and the Commodity Futures Trading Commission (CFTC), but the Federal Deposit Insurance Corporation (FDIC) and the Office of the Comptroller of the Currency (OCC) are also involved.

During a July meeting, the group discussed the rapid growth of stablecoins, their potential uses as a means of payment, and their potential risks to users, the financial system and national security. Afterward, Treasury Secretary Janet Yellen said the government must move quickly to establish a regulatory framework for stablecoins.

In meetings with industry executives this month, the Treasury also asked whether some stablecoins would merit direct oversight if they became extremely popular, Reuters reported https://www.reuters.com/technology/exclusive-us-treasury-financial-industry-discuss-cryptocurrency-stablecoins-2021-09-10.

The group is expected to publish a report detailing the risks and opportunities of stablecoins in coming months.

The main action is coming out of the SEC. In testimony before the Senate this week, SEC Chair Gary Gensler said the agency was examining cryptocurrencies in a number of areas: the offer and sale of crypto tokens; crypto trading and lending platforms; stable value coins; investment vehicles providing exposure to crypto assets or crypto derivatives, and the custody of crypto assets.

Gensler’s SEC also appears to be taking a more aggressive legal interpretation of when crypto assets fall within its purview than the agency did under former President Donald Trump. Gensler has said, for example, that so-called “DeFi platforms” – peer-to-peer crypto platforms that bypass the traditional gatekeepers of finance such as banks and exchanges – fall within the SEC‘s purview.

The U.S. Federal Reserve is due shortly to issue a hotly anticipated report exploring the potential adoption of a digital dollar, while the Boston regional Fed is also working with the Massachusetts Institute of Technology to explore the technical aspects of a digital dollar.

While the Fed is on the fence about creating its own digital coin, many policymakers in Washington see it as a critical step in combating the rise of privately operated digital coins.

In parallel, a small group of senior staff at the Fed, OCC and FDIC have been collaborating on a “crypto policy sprint” focused on cryptocurrencies in relation to the banking sector.

Acting OCC head Michael Hsu has said the goal of the group is to “agree on definitions, use cases, risks, and gaps, and to discuss policy options related to digital assets.”

As part of that effort, the OCC is also reviewing a decision by the head of the agency under Trump that allowed national banks to provide custody of cryptocurrency.