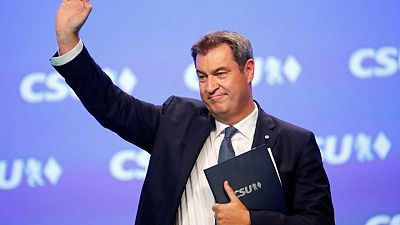 The comments by Markus Soeder, premier of the southern state of Bavaria, come after Friedrich Merz, the conservatives’ key expert for fiscal and economic policies, lashed out at the ECB‘s loose monetary policy.

The conservatives’ top candidate in Sunday’s election, Armin Laschet, has failed to translate Merkel’s high approval ratings into continued support for his party, with all polls putting Finance Minister Olaf Scholz and his Social Democrats in the lead.

Speaking to reporters in Munich, Soeder said that policy makers should work on measures to put the brakes on rising consumer prices and cushion the effects of higher inflation for households as this was amounting to “cold expropriation”.

The national inflation rate (CPI) even soared to 3.9% in August, hitting its highest since December 1993 when the economy boomed following German reunification.

Bundesbank President Jens Weidmann has said his advisers anticipated inflation nearing 5% in Germany later this year before easing again due to pandemic-related special factors such as a temporary VAT cut which has affected comparisons.

“The ECB must act at the latest at 5%. What is needed is a measured exit plan from the zero interest rate policy,” Soeder said.

The ECB said on Sept. 9 it would trim its emergency bond purchases over the coming quarter, taking a first small step towards unwinding the emergency aid that has propped up the euro zone economy during the pandemic.

ECB board member Isabel Schnabel said on Monday that the central bank was set to use its bond-buying programme to guide investor expectations about an interest rate hike as the latter won’t come until the former ends.

Merkel is planning to stand down after the election and 16 years at the helm.

Merkel and Scholz have both avoided any direct comments on the ECB‘s monetary policy in recent years, pointing to the need to respect the central bank’s independence.