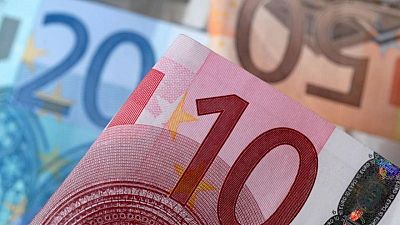 LONDON – Foreign central banks and reserve managers are showing growing interest in new debt issued by the European Union and other pan-European bodies, in a positive sign for the euro’s international role, speakers told a virtual financial conference on Tuesday.

The EU is selling bonds to finance a fund worth up to 800 billion euros ($939 billion) to aid the post-COVID 19 recovery.

The fund’s temporary nature means there is still no permanent Europe-wide asset rivalling U.S. Treasuries to boost the euro’s role as an international reserve currency.

But bankers and other speakers at the Official Monetary and Financial Institutions Forum (OMFIF) said EU debt sales were drawing strong demand from central banks and reserve managers, particularly in Asia.

“We’ve seen massive interest from Asian investors, we’ve seen interest from reserve managers for the euro reserves and we have not seen any cannibalisation of any sovereign issuance,” Georges Elhedery, group managing director and co-chief executive officer of global banking and markets at HSBC, told a panel.

Niall Bohan, a director of the European Commission’s budget directorate, said this kind of demand was more important than the level of overall orders EU bonds had received.

“In 2020, we had the most Asian investors ever outside of the euro area. We had investors from around the globe, we had central banks, more and more coming into the euro and actually seeing the euro as a stronger alternative to the U.S. dollar as a reserve currency,” he told the panel.

Anev Janse estimated that the value of European safe assets issued would reach 2 trillion euros in coming years, a move he said was “appealing to reserve managers globally”.

Pablo de Ramon-Laca Clausen, director general of the Spanish Treasury, said the EU recovery fund “could become permanent if it is seen as useful”, adding that many investors wanted the euro to become a stronger reserve currency.

Christian Kopf, chief investment officer for fixed income and foreign exchange at Union Investment, said he believed that positive sentiment among investors towards the recovery fund was leading to some reallocation in favour of some European assets.