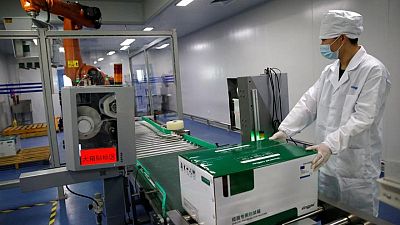 TIANJIN, China – At a factory in China’s north, workers are busy testing an automated vehicle designed to move bulky items around industrial spaces, one of a new generation of robots Beijing wants to shift the country’s manufacturing up the value chain.

“The government is paying great attention to the manufacturing sector and the real economy – we can feel that,” said Ren Zhiyong, general manager of Tianjin Langyu Robot Co, as he gave Reuters a guided tour of his plant.

China is backing R&D efforts by high-tech manufacturers like Langyu, driven by an urgent desire to reduce reliance on imported technology and reinforce its dominance as a global factory power, even as it cracks down on other parts of the economy.

Beijing’s pivot puts the focus on advanced manufacturing, rather than the services sector, to steer the world’s second-largest economy past the so-called “middle income trap”, where countries lose productivity and stagnate in lower-value economic output.

“Pressure is the driving force, and without pressure, it is difficult for companies to develop,” said Ren.

He expects revenues to more than double to 100 million yuan ($15.52 million) this year from 2020, on increased demand for high-tech products such as Langyu’s automated guided vehicles.

More broadly, the city of Tianjin plans to invest 2 trillion yuan ($311 billion) between 2021 and 2025, with 60% earmarked for strategic emerging industries, Yin Jihui, head of the Tianjin Industry and Information Technology Bureau, told Reuters.

The investment, comprising corporate and government outlays, will help boost manufacturing to 25% of economy in 2025 from 21.8% in 2020, Yin said.

The share of strategic industries in Tianjin’s factory output will also rise to 40%, Yin said, from 26.1% last year.

“It will be very difficult and challenging to achieve these goals, (as) we need to ensure stable economic development while making a transition from old to new engines,” Yin said.

China’s five-year plan in March pledged to keep manufacturing’s share of GDP “basically stable”, in contrast to the 2016-2020 plan that focused on services to create jobs.

The coronavirus and the Sino-U.S. trade war have reframed the way policymakers see factories: no longer just grimy relics of an old economy but assets of strategic value.

During the pandemic, China’s factories have churned out everything from masks and ventilators to work-from-home electronics, propelling the economic recovery from its record slump in early 2020.

“The higher external pressure, the more emphasis they put on the manufacturing. That will be turned into actual policy support.”

“We have taken some measures, including increasing our own R&D capacity, and cooperating with other firms and universities,” Ringpu Vice President Fu Xubin said.

“We will seek to boost our ability to find substitutes in areas where we face problems.”

Officials worry too rapid a shift towards services, which employs more people but is less productive than manufacturing, could undermine long-term growth, as it did in some Latin American economies.

Beijing does not want manufacturing to dip below 25% of GDP, roughly in line with South Korea’s economic profile, government advisers said.

“Governments at the central and local levels are stepping up support for advanced manufacturers, but achieving industrial upgrading won’t be a smooth ride,” said a government adviser who spoke on condition of anonymity.

From 2021 to 2025, China aims to boost R&D spending by over 7% annually, focusing on “frontier” technologies such as artificial intelligence, quantum computing and semi-conductors.

The central bank has channelled more credit into manufacturing, especially high-tech firms, at the expense of the property sector, which faces fresh curbs against speculative investment.

Langyu, the robotics company, plans to spend about 20 million yuan on R&D this year, or 20% of expected 2021 revenues, helped by greater tax breaks for R&D, Ren said.

Ringpu channels 8-12% of its revenues into R&D and will spend 1.3 billion yuan between 2020 and 2023 to upgrade automation and production.

“For China, to achieve tech self-reliance in some sectors is a matter of survival,” said Tu Xinquan, head of China Institute for WTO Studies at University of International Business and Economics.

“The sense of crisis is a big driving force.”