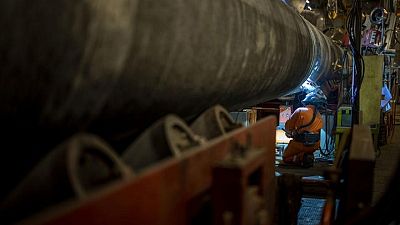 BRUSSELS -A group of European Parliament lawmakers has asked the European Commission to investigate Gazprom’s role in soaring European gas prices, saying the company’s behaviour had made them suspect market manipulation.

Gas prices in Europe have surged in recent months, helping to drive European electricity costs to multi-year highs, with wholesale power prices not forecast to fall significantly this year.

In a letter to the EU’s executive Commission, dated Sept. 16, around 40 of the Parliament’s 700 lawmakers said they suspected Russia’s Gazprom had acted to push up gas prices.

“We call on the European Commission to urgently open an investigation into possible deliberate market manipulation by Gazprom and potential violation of EU competition rules,” said the letter.

In response to the accusations, Gazprom said it supplied its customers with gas in full compliance with existing contracts.

The European Commission said it had received the letter and would reply in due course.

The lawmakers said they were suspicious of the company’s “effort to pressure” Europe to agree a fast launch to its Nord Stream 2 gas pipeline, which still has to clear regulatory hurdles that could take months to complete.

Gazprom announced last week that it had completed construction of the Nord Stream 2 pipeline to Germany, doubling its gas exporting capacity via the Baltic Sea.

The EU lawmakers cited incidents including recent shut-ins of some of Gazprom’s production and said the company had refused to book gas transport capacities through existing pipelines.

“All these factors allow to suspect that the record natural gas price surge in Europe in the recent weeks may be a direct result of Gazprom’s deliberate market manipulation,” the letter said.

Nord Stream 2 has faced sanctions from the United States and criticism from other countries wary of the EU increasing its reliance on energy imports from Russia.