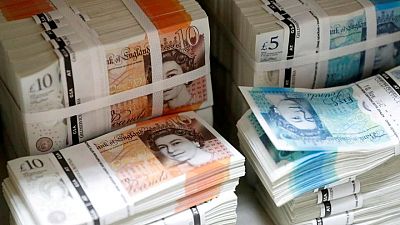 LONDON -Sterling hit fresh lows against a broadly stronger dollar and rose versus the euro on Friday as some investment banks brought forward their forecast for a Bank of England rate rise.

“A poor UK August retail sales report may take some of the momentum out of the rise in the UK money market rates and also GBP,” ING said, referring to the British pound.

Some analysts forecast the Bank of England (BoE) will raise rates in mid-2022, after recent strong inflation and economic data.

Goldman Sachs said on Thursday it had pulled forward its baseline forecast for a rate rise to May 2022 as the view of the BoE’s Monetary Policy Committee is that minimum conditions for starting a monetary tightening have been met.

Sterling hit a multi-week high versus the dollar on Tuesday as data showed that underlying U.S. consumer prices increased at their slowest pace in six months in August.

Although BoE rate-setters may be tempted to vote next week for an early end to their COVID-19 stimulus plans, they are likely to hold off for now.

They note Britain is a net importer of fuels running a significant deficit in natural gas, adding that “the combination of the much sharper recent increase in gas prices and this fuel composition has led to a larger deterioration in the UK’s terms of trade compared to European peers.”