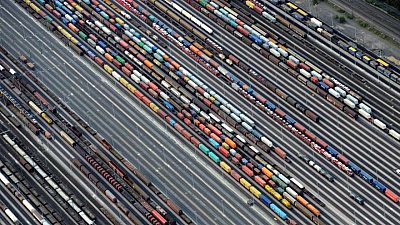 BRUSSELS – The euro zone’s trade surplus with the rest of the world declined in July from a year earlier, data released by the European Union’s statistics office showed on Thursday, as imports grew at a faster rate than exports.

Eurostat said the euro zone’s unadjusted trade surplus with the rest of the world fell to 20.7 billion euros ($24.4 billion)in July from 26.8 billion euros in July 2020.

For the European Union as a whole, the non-seasonally adjusted data showed a decline in the trade surplus in both July and in the Jan-July period from a year earlier. The bloc is a major importer of oil and other raw materials and a major exporter of chemicals, machinery and vehicles.

The European Union’s trade deficit with China increased, while its surplus with the United States and Britain expanded in the first seven months of 2021.

To Britain, which has left the bloc, exports rose by 6.2% and imports fell by 17.1%, although Eurostat has calculated trade with Britain differently since the start of the year.

Goods that had an origin outside Britain are now treated as imports from that country rather than from Britain.