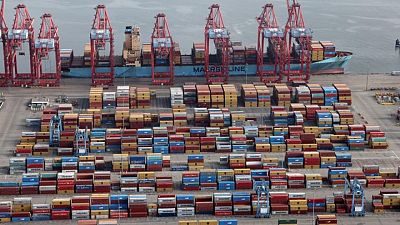 WASHINGTON – U.S. import prices fell for the first time in 10 months in August amid a decline in the costs of petroleum products, further evidence that inflation had probably peaked.

Import prices dropped 0.3% last month after increasing 0.4% in July, the Labor Department said on Wednesday. The first decrease since October 2020 lowered the year-on-year increase to 9.0% from 10.3% in July. Economists polled by Reuters had forecast import prices, which exclude tariffs, climbing 0.3%.

The report followed on the heels of news on Tuesday that consumer prices recorded their smallest gain in seven months in August. Federal Reserve Chair Jerome Powell has steadfastly maintained that high inflation is transitory.

The run-up in prices centered on used cars and trucks, as well as services in industries worst affected by the COVID-19 pandemic, is slowing. But strained supply chains will likely keep inflation elevated for a while.

Prices for imported motor vehicles, parts and engines rose 0.3% after increasing 0.4% in July. The cost of goods imported from China gained 0.4% after rising 0.6% in July.

The report also showed export prices climbed 0.4% in August, the smallest gain since October 2020, after shooting up 1.1% in July. Prices for agricultural exports rebounded 1.1%. That followed a 1.7% decrease in July. Export prices rose 16.8% year-on-year in August after jumping 17.0% in July.

There were increases in the prices of nuts, wheat, meat, vegetables, and dairy products, which offset lower prices for corn, animal feeds, fruit, and soybeans. Agricultural export prices advanced 33.4% over the past year.