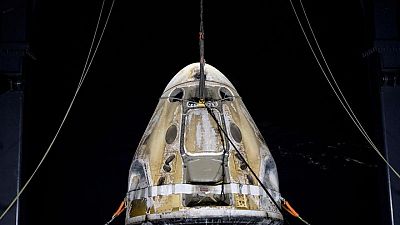 – The quartet of private citizens who make up the Inspiration4 team, poised to make history aboard a SpaceX rocket ship as the first all-civilian crew launched into orbit, may appear at first glance to be everyday people, but they are far from ordinary.

They consist of a billionaire internet commerce executive and jet pilot; a geoscientist and onetime finalist in NASA‘s astronaut candidate program; a physician’s assistant at the childhood cancer hospital where she was once a patient; and an aerospace data engineer and U.S. Air Force veteran.

Following are profiles of the Inspiration4 crew.

Originator and billionaire benefactor of the Inspiration4 project, Isaacman paid an undisclosed hefty sum – reported by Time magazine to have run roughly $200 million – for all four seats aboard the SpaceX Crew Dragon capsule.

Isaacman parlayed the business he started as a teenager in the basement of his family’s home into one of the leading U.S. financial transaction services, Shift4 Payments Inc

A geoscience professor at South Mountain Community College in Phoenix with a doctorate in science education, Proctor’s lifelong passion for space exploration is rooted in her father’s work on Guam, where she was born, for a NASA tracking station during the Apollo lunar missions.

Proctor also was a 2009 finalist in NASA‘s astronaut candidate program, and is now poised to become only the fourth African-American woman ever to fly to space. She was chosen through an online business contest conducted by Shift4 Payments as part of the Inspiration4 crew selection.

A childhood bone cancer survivor, Arceneaux went on to become a physician assistant at St. Jude Children’s Research Center in Memphis, Tennessee, the leading pediatric cancer center where she was once a patient. Arceneaux, who lost part of her left thigh and knee to cancer at age 10, boasts that she will become the first person with a prosthetic body part to go into space.

She will also be the youngest American to go to space and the youngest person ever to fly into orbit. According to SpaceX, only 553 humans have ever been to orbit.

St. Jude, where Arceneaux now works with leukemia and lymphoma patients, is the chief beneficiary of the Inspiration4 project, which Isaacman conceived primarily as a fundraising and promotional endeavor for the institute.

Arceneaux has said she was motivated to take part in the spaceflight to show her young patients “what life can look like after cancer.”

A data engineer at aerospace giant Lockheed Martin Corp in Everett, Washington, Sembroski spent some of his free time in college launching high-powered model rockets and volunteered with ProSpace, a grassroots organization that lobbied on behalf of private space ventures on Capitol Hill.

He joined the U.S. Air Force as an electro-mechanical technician, and was deployed to Iraq and also helped maintain a fleet of Minuteman III intercontinental ballistic missiles before leaving active duty in 2007.

Sembroski was selected for the Inspiration4 crew through a sweepstakes that drew 72,000 applicants and raised $113 million in St. Jude donations.