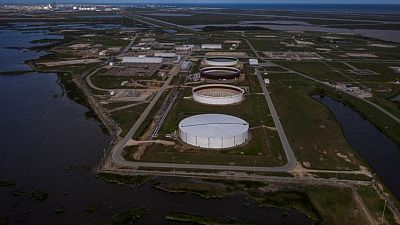 By Sabrina Valle and Marianna Parraga

The storm hit the U.S. Gulf of Mexico almost two weeks ago, damaging infrastructure and removing more than 21 million barrels of production from the market.

Over two-thirds of the U.S. Gulf of Mexico’s oil production, or 1.2 million barrels per day, were still shut as repair efforts dragged on, helping to support global oil prices.

Over 1.68 billion cubic feet per day of natural gas were also offline on Friday, while a total of 65 platforms and three rigs continue evacuated, said the Bureau of Safety and Environmental Enforcement (BSEE).

Pipeline operator Enbridge on Friday said its offshore assets were ready to operate once producers bring production back online.

Chevron on Thursday said it has restored partial production at its Jack St. Malo and Blind Faith platforms.