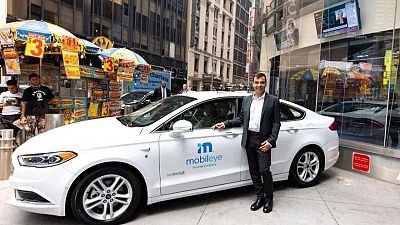 Mobileye said it hopes to remove safety drivers from the robotaxis by the end of next year and scale up the technology across Germany and other European countries later this decade upon regulatory approval.

Mobileye on Tuesday unveiled vehicles equipped with its self-driving system that will be used for commercial, driverless ride-hailing services that it plans to provide with German mobility service provider SIXT.

The self-driving vehicles produced by Chinese carmaker NIO were certified to go up to 130km an hour (over 80 mph) in Munich, Mobileye’s vice-president of autonomous vehicle standards Jack Weast said in an interview with Reuters.

Weast added that German regulation permitting autonomous driving contributed to the company’s choice of Munich as its deployment city.

The German law, passed in May, is the first federal law worldwide to permit autonomous driving in regular traffic, albeit only in set areas and with the requirement that the vehicle be overseen by a human.

Self-driving tech firms like Waymo have yet to successfully deploy autonomous vehicles beyond limited areas, hampered by cost and technical and regulatory challenges.

“Even though we can power a full self driving vehicle with only cameras, we feel that at this point in time, it’s not safe enough,” he said at an embargoed press briefing ahead of the IAA Mobility event in Munich.

He said additional sensors would provide robustness to its self-driving system to prove it is much better than human drivers when it comes to reducing accidents.

U.S. regulators have been probing the safety of what Tesla calls “Full Self-driving” capability, which helps drivers stay in lanes and steer on highways, following a series of accidents including a fatal crash in Texas.

Mobileye broke ties with Tesla following a fatal accident in Florida in 2016.