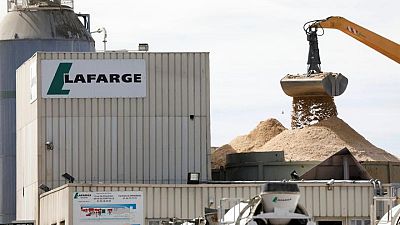 PARIS – Lafarge lost a bid to dismiss a charge of complicity in crimes against humanity in Syria’s conflict on Tuesday when France’s highest court said the matter should be re-examined, overturning an earlier ruling.

Lafarge, now part of Switzerland-listed Holcim whose shares slid on the news to trade down 3.6%, is under formal investigation in France over its efforts to keep a factory running in Syria after conflict erupted in 2011.

The company has previously admitted, following its own internal investigation, that its Syrian subsidiary paid armed groups to help protect staff at the plant.

But it has rejected several charges against it as part of the French legal probe, including that it was complicit in crimes against humanity because of its dealings with militant groups in the area, which included Islamic State.

In late 2019, another court threw out that charge, saying Lafarge had not deliberately associated itself with those crimes. The Supreme Court said on Tuesday a person or firm could be complicit by turning a blind eye, even without actively taking part in the crimes.

“In this case, the payment of several million dollars … to an organisation which is actively criminal is enough to characterise that complicity, whether or not the party in question was only doing so to pursue a commercial activity,” the Supreme Court said in its ruling.

The Supreme Court said magistrates should re-examine Lafarge’s request to have the charge thrown out.

The charge of complicity could be re-instated, setting a precedent as no French firm has yet been tried in connection to this crime, even though French courts have jurisdiction over crimes committed overseas by French people or firms.

No trial date has been set and the legal investigation, which is also probing allegations of financing of an organisation deemed to be a terrorist body, is still underway.

Lafarge said it “continues to cooperate fully with the French judicial authorities”. It said it would not comment further on the judicial process but said it had taken steps to ensure there was no repeat of such a matter in future.

The group halted its Jalabiya plant in northern Syria – almost 100 km (63 miles) from Raqqa – in 2014 when the factory came under attack from militants. But it continued to operate in the area and maintain local staff after the country was beset by conflict in 2011 and as surrounding areas gradually came under the control of armed groups such as Islamic State.

Rights groups including the Berlin-based European Centre for Constitutional and Human Rights (ECCHR) and France’s Sherpa, which brought claims against Lafarge, alleged the group bought raw materials and oil from militants and made payments for the safe passage of workers through checkpoints.

These payments amounted to close to 13 million euros ($15 million), Sherpa and ECCHR have said.

Rights groups including Sherpa have also challenged companies operating in China and French prosecutors launched an inquiry in July into four fashion retailers suspected of concealing crimes against humanity in China’s Xinjiang region.

Lafarge was taken over in 2015 by Holcim, making the Swiss firm the biggest cement maker in the world.

Holcim said in filings it was facing preliminary investigations from the U.S. Department of Justice (DOJ) over its dealings in Syria. It said in its 2021 half-year report it was discussing a possible resolution with the DOJ.

It was not immediately clear what penalties Lafarge could face in any French trial. Several former executives of the company are also under formal investigation. Lafarge said no individual being investigated was still with the company.