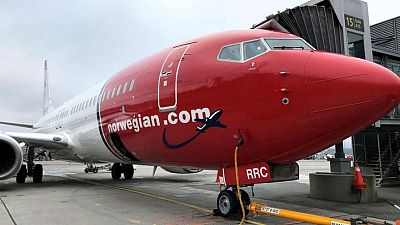 By Victoria Klesty and Terje Solsvik

OSLO -Norwegian Air said on Tuesday it would not need to raise more cash as easing COVID-19 travel restrictions lifted bookings, although the budget carrier which has emerged from bankruptcy proceedings did not provide a 2021 outlook.

The pandemic sent the indebted airline into bankruptcy proceedings https://www.reuters.com/business/aerospace-defense/norwegian-air-saved-collapse-reinvents-regional-carrier-2021-05-26 last year, forcing it to terminate its transatlantic network and to cut more than 6,000 jobs to survive. It now has about 3,000 employees.

The company reported on Tuesday revenue of 591 million Norwegian crowns ($68.3 million) for the first half of 2021, down from 7.1 billion crowns in the same period a year ago. It said it remained focussed on preserving cash for the rest of 2021.

“We will very much be ready for the peak season (of 2022), so there is no risk today that we will have to go out and get more capital in the foreseeable future,” Chief Executive Geir Karlsen told Reuters.

Norwegian emerged from the government-backed bankruptcy proceedings in May and saw the number of passengers jump in July but still less than a fifth of those flown at the same time two years ago.

Bookings have risen in response to relaxation of travel restrictions and the roll-out of vaccines, Norwegian said, adding that it expected a further boost in the second quarter of 2022 when holiday travel was expected to pick up.

The current fleet of 51 aircraft, down from around 160 last year, would likely be fully utilised by the end of the year, up from less than 10 jets flown during April and May, the company said. It aims to expand to between 60 and 70 planes in 2022.

Norwegian’s debt was reduced by around 80% during reconstruction as creditors took control, but the company now faces fresh competition from Flyr on domestic routes in Norway and some foreign destinations.

“Given the continuous uncertainty and ongoing impact on overall demand for air travel due to COVID-19, Norwegian does not provide guidance for 2021,” the board said.