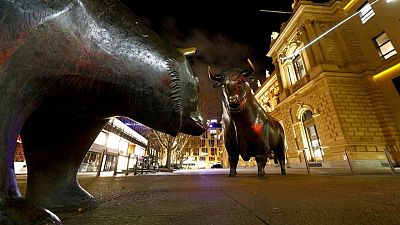 BENGALURU – A modest correction in global stock markets is likely by the end of this year, according to a slim majority of fund managers polled by Reuters who recommended trimming global exposure to equities in August in favour of bonds.

On Monday, MSCI‘s benchmark for global equity markets hit historic highs and European shares, with a monthly gain of more than 2%, were on track to clinch their longest winning run in over eight years, buoyed by pandemic-related monetary and fiscal stimulus.

Still, fund managers and chief investment officers in Europe, Japan and the United States polled Aug. 12-30 slightly cut recommended equity allocations to an average 49.9% of their model global portfolio from a 3-1/2 year high of 50.1% in July.

The findings precede an expected inflection point in the Federal Reserve’s monetary policy, with diverging views amongst officials on the precise timing of when a tapering in the Fed’s $120 billion of monthly bond purchases will begin.

Asked about the likelihood of a correction in global equity markets by the end of this year, a narrow majority of respondents – nine of 17 – said it was likely, while the others said it was unlikely.

A separate Reuters survey of over 250 equity market strategists found this year’s blistering global stocks rally is nearly over, and a correction was likely by end-year.

“We would anticipate this is more of a growth scare than risk of a recession or significant slowdown given the amount of stimulus still working through the economy.”

Of those who said a correction was likely, the poll median forecast stock prices to drop 8% with predictions ranging 5%-10% in the latest survey.

But fund managers reiterated that most of the recent drops in stock prices proved to be opportune moments to increase exposure to risky assets taking advantage of rock-bottom interest rates and the resultant liquidity.

Asked about the most likely change in model portfolio recommendations over the next three months, 10 of 19 respondents said they would increase exposure to equities.

“We might increase our equity exposure, but we are now in a stock picker’s market. It is a question of ‘what you own in the market rather than owning the market’,” said Peter Lowman, chief investment officer at Investment Quorum in London.

Dec Mullarkey, managing director, investment strategy at SLC Management in Boston, reiterated the widespread view that for returns, equities are the only game in town.

“We might think things cannot get any better from here, but when we look relative to other asset classes, even for normal, reasonable and modest performance from here, it is still going to be kind of a healthy outcome,” he said.

Still, the latest poll found bond holding suggestions were increased to account for 39.7% of the balanced global portfolio, up from last month’s 39.3%.

Chief investment officers on the whole tend to be more prudent with their allocations in a setting where monetary policies are bound to be tighter.

Even 18 months after the onset of the pandemic, new variants and the damage they carry remains a top risk to fund managers’ portfolio positioning, along with any sudden tapering in monetary stimulus by central banks.