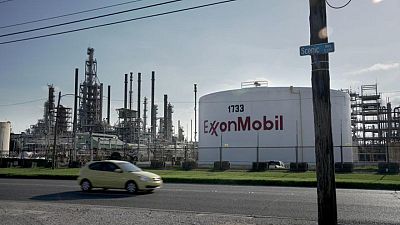 HOUSTON – Exxon Mobil Corp is cutting production at its Baton Rouge, Louisiana, refinery to 50% of its 520,000 barrel-per-day (bpd) capacity ahead of the expected landfall of Hurricane Ida on Sunday, sources familiar with plant operations said on Saturday.

Exxon is shutting one of the two 110,000-bpd gasoline-producing fluidic catalytic crackers at the refinery, the sources said.

Hurricane Ida is forecast to pass near Baton Rouge at hurricane strength by Monday, according to the U.S. National Hurricane Center.

Exxon is also shutting some units in the adjoining chemical plant because trucks won’t be able to reach the Baton Rouge complex to take away products during the storm’s passage, the sources said.

Earlier on Saturday, Exxon spokeswoman Julie King said some units were being shut at the Baton Rouge complex.

“Exxon Mobil Baton Rouge facilities are adjusting operations and shutting down some units and equipment to ensure safe and stable operations during the hurricane,” King said.

King did not identify which units were being shut or how operations were being adjusted at the complex.

Exxon continues to operate the Baton Rouge Fuels Terminal, which has supplied 6.3 million gallons, or 150,000 barrels, of fuel this week to southeast Louisiana.

The sources said rubber and lube oil production were mostly to be shut temporarily at the chemical plant during the storm.