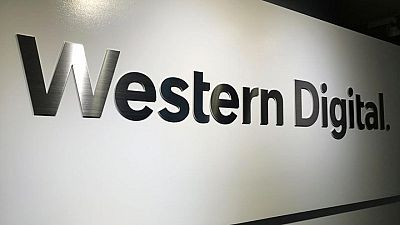 By Krystal Hu and Makiko Yamazaki

NEWYORK/TOKYO -Western Digital is in advanced talks for a possible $20 billion stock merger with Japanese chipmaker and partner Kioxia, a person familiar with the matter said, a move that would create a NAND memory giant to rival Samsung Electronics.

The companies could reach an agreement as early as mid-September, and Western Digital CEO David Goeckeler would run the combined firm, the person said, requesting anonymity to discuss confidential matters.

The Wall Street Journal reported the talks earlier on Wednesday. Kioxia Holdings Corp and Western Digital both told Reuters they do not comment on speculation about mergers.

A combination of the two would rewrite the competition to capture robust demand for memory chips that has been driven by 5G expansion and a pandemic-fueled rise in work from home.

While Samsung dominates with over a third of the NAND market, according to research firm TrendForce, Kioxia has a nearly 19% share and Western Digital 15%. South Korea’s SK Hynix Inc and U.S. firms Micron Technology Inc and Intel Corp are the other large players.

“Such a deal would be a defensive, but prudent, move by Western to reinforce its competitive position in the swiftly consolidating chip market,” Morningstar analyst William Kerwin said in a research note.

“In the long term, we expect the NAND market to … consolidate down to about three leading players for a largely commodity-like product,” Kerwin said.

A Western Digital-Kioxia merger is also likely to draw anti-trust scrutiny in several countries, including in the United States and China.

Monopoly concerns and a years-long trade conflict between the United States and China have scuppered deals in the past few years.

Qualcomm Inc, for instance, walked away from a $44 billion deal to buy NXP Semiconductors after failing to secure Chinese approval in 2018, and Nvidia Corp’s planned $40 billion acquisition of British chip designer ARM hit a major hurdle last week in the UK.

Chinese antitrust watchdog State Administration for Market Regulation did not immediately respond to a request for comment on approval for a potential Western Digital-Kioxia deal.

Kioxia, sold by Toshiba Corp in 2018 to a consortium led by Bain Capital for $18 billion as Toshiba Memory Corp, shelved plans last year for what would have been Japan’s largest initial public offering in 2020.

An IPO is still a possibility should Kioxia fail to reach a deal with San Jose, California-based Western Digital, the source told Reuters. Financial magazine Diamond in June said Kioxia was planning an IPO as early as September.

Kioxia said in its statement to Reuters on Thursday that it was considering the appropriate timing for an IPO.

Toshiba, which still owns about 40.6% of Kioxia, is in talks with at least four global private equity firms to seek their ideas for a new strategy, Reuters reported on Wednesday, citing sources.

Toshiba’s shares were up 1.3% in afternoon trading.

Western Digital’s shares closed up 7.8% on Wednesday, giving it a market capitalization of more than $20 billion.

Toshiba said it was not involved in the management of Kioxia and not in a position to comment. It said it continues to consider the most appropriate approach to its investment in Kioxia to maximize shareholder value.