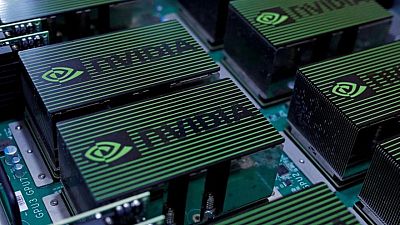 – The U.S. Department of Energy is nearing a deal to purchase a supercomputer made with chips from Nvidia Corp and Advanced Micro Devices Inc as a key lab waits for a larger supercomputer from Intel Corp that has been delayed for months, two people familiar with the matter told Reuters.

The Nvidia and AMD machine, to be called Polaris, will not be a replacement for the Intel-based Aurora machine slated for the Argonne National Lab near Chicago, which was poised to be the nation’s fastest computer when announced in 2019.

Instead, Polaris, which will come online this year, will be a test machine for Argonne to start readying its software for the Intel machine, the people familiar with the matter said.

Argonne spokesperson Ben Schiltz did not immediately respond to a request for comment, nor did AMD spokesperson Aaron Grabein. Nvidia spokesperson Ken Brown declined to comment.

Intel, AMD and Nvidia are battling for market share for chips used in data centers. The United States’ array of supercomputers do scientific work for healthcare, climate and other researchers, as well as performing virtual testing of the country’s nuclear weapons.

Key technologies pioneered in the systems often filter down to commercial data centers in subsequent years, giving an advantage to chip companies which win the contract work.

When Aurora was first announced, Intel and Argonne said the machine would be delivered in 2021, but Intel still has not delivered the key Ponte Vecchio and Sapphire Rapids chips. Intel said in June that the Sapphire Rapids chips would not be in production until 2022, and on Tuesday Intel spokesperson Will Moss said the company remained committed to delivering the computer in 2022.

The $500 million contract called for Intel and partners to deliver a computer with so-called exaflop performance, or the ability to perform 1 quintillion – or 1,000,000,000,000,000,000 – calculations per second. Now, the first exascale computer in the United States will likely be a different machine at a different lab – Oak Ridge National Lab in Tennessee – built by Hewlett Packard Enterprise Co with chips from AMD expected to be delivered later this year.

The Polaris machine at Argonne will not be as powerful as the Intel machine, the sources said. Based on Nvidia’s A100 chips and AMD‘s Rome and Milan chips, the Polaris computer will be able to make some exaflop calculations but mostly work at slower speeds.