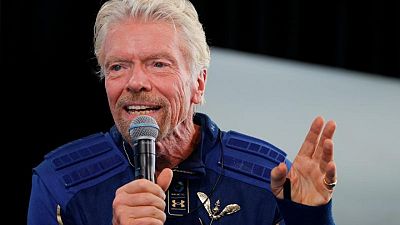 By Sohini Podder and Niket Nishant

– Billionaire Richard Branson’s Virgin Orbit, a small satellite launch service provider, is going public through a merger with a blank-check vehicle that values it at about $3.2 billion.

The deal with NextGen Acquisition Corp. II, announced on Monday, includes $100 million in funding from Boeing Co, AE Industrial Partners and others in the form of private investment in public equity, or PIPE.

Virgin Orbit and rivals Firefly and Rocket Lab are among firms building miniaturized launch systems to capitalize on an expected boom in demand for compact satellites. They offer a unique “air-launch” method of sending satellites to orbit.

“We can turn any runway across the globe, from an airport into a spaceport, because we fly a (Boeing) 747,” said Chief Executive Officer Dan Hart, a former executive of the U.S. planemaker.

The rocket has to “start work” when it is already at 35,000 feet, reducing carbon use by 90%, Hart said in an interview.

He added the company was pursuing $4 billion in opportunities and had $300 million in backlogs across contract and launch service deals, among others. It won a $35 million contract in 2020 from the U.S. Space Force for three missions.

The deal is expected to provide $483 million in proceeds to the combined company, which will list on the Nasdaq under the symbol “VORB“ after the merger.