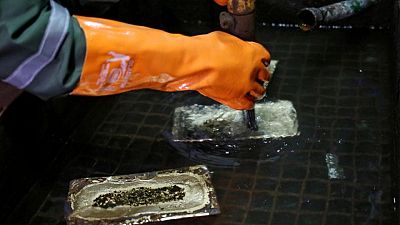 JOHANNESBURG – South Africa-based Gold Fields Ltd reported on Thursday that half-year profit more than doubled as it benefited from rising prices and output and its new CEO said the company would look for acquisitions over the medium term.

The company, one of the world’s top 10 gold producers and which operates across Australia, Latin America and Africa, had embarked on an organic growth strategy four years ago to increase its mine life, reserves and output.

CEO Chris Griffith, who took over the role in April, said he is comfortable with the current strategy but since the company’s production would peak at around 2.7-2.8 million ounces by 2024, he would look at acquisitions to maintain output levels.

“It may require us to look at either acquiring, or developing new projects, perhaps acquiring some in-production assets,” Griffith told Reuters in an interview.

“But I think it’s more of a medium-term strategy. But we’ll start doing that homework now.”

The company expects to end the year with production of 2.3-2.35 million ounces of gold with no change to the production and cost guidance, the CEO said.

Miners compounded their earnings, started cutting debt and increased capital expenditure to mine lower grades that became viable at high prices. That increased costs for companies even as production, revenue and profits soared.

Gold Fields’ all-in sustaining costs, a metric to measure all round cost of gold miners, rose 11% to $1,093 per ounce for the six months through June.

Gold Fields reported headline earnings per share of 45 U.S. cents, up from 20 cents a share a year earlier.