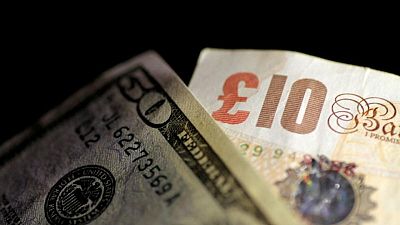 LONDON – Sterling hit its lowest in a month against the dollar on Thursday as a pull-back in global stock markets saw a bid for safe havens such as the greenback, which weighed on risk and growth correlated currencies.

Minutes from the U.S. Federal Reserve’s latest meeting released on Wednesday showed policymakers at the central bank expect to reduce pandemic-era stimulus before the year is out.

The minutes pushed Wall Street’s main stock index down more than 1% and drove several currencies to multi-week lows against the safe-haven greenback. European markets stumbled at open and U.S. stock futures were pointing to a weaker start.

The pound was no exception to the selloff in risk assets, falling as much as 0.6% against the dollar to $1.3666, its lowest since July 21.

“It’s a perfect storm for FX markets right now. You’ve got a risk off macro dynamics, weaker commodity prices, a hawkish Fed, weaker Chinese yuan … A lot of these dynamics suggest it will be a tricky period for FX markets,” said Viraj Patel, global FX and macro strategist at Vanda Research.

“Outside of the broader macro risk regime, I still like GBP as a currency because the Bank of England is more in line with the Fed’s hawkish policy,” Patel said, adding that the pound was still susceptible to gyrations in this particular environment.

Having also fallen on Tuesday after a jump in the dollar, the pound was little moved by inflation numbers on Wednesday, which investors believe will have little bearing on the rising trend for inflation.

UK inflation data showed a sharper slowdown than expected, though analysts said investors were focused more on the state of the labour market.