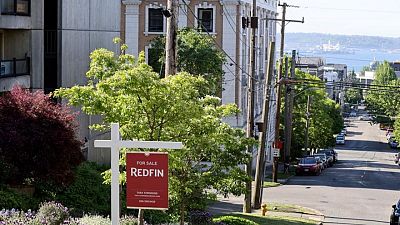 WASHINGTON – U.S. homebuilding fell more than expected in July, the latest sign that surging construction costs and home prices continued to constrain the housing market early in the third quarter.

Though the report from the Commerce Department on Wednesday showed a rebound in building permits after three straight monthly declines, the gain was in the volatile multi-family home segment, which will do little to ease an acute housing shortage that is driving up prices.

The number of houses authorized for construction but not yet started last month was the third highest on record, indicating builders remained hesitant to undertake new projects.

“There is no question that home building has hit some sort of near-term ceiling, with surging home prices reducing affordability and leading to a record drop in the proportion of consumers that feel now is a good time to buy a home,” said Mark Vitner, a senior economist at Wells Fargo in Charlotte, North Carolina.

Homebuilding fell in the Northeast, Midwest and West, but rose in the populous South. Starts increased 2.5% on a year-on-year basis in July. Single-family starts, which account for the largest share of the housing market, fell 4.5% to a rate of 1.111 million units. Starts for the multi-family segment tumbled 13.1% to a rate of 423,000 units.

Permits for multi-family housing projects jumped 11.2% to a rate of 587,000 units, reflecting a rebound in demand for rental accommodation as the economy fully reopens.

The report followed on the heels of a survey from the National Association of Home Builders on Tuesday showing confidence among single-family homebuilders dropped to a 13-month low in August because of higher material costs and home prices, which are cooling demand for houses.

Stocks on Wall Street were mixed in volatile trade. The dollar was steady against a basket of currencies. U.S. Treasury prices fell.

Building costs remain an issue even though lumber futures have tumbled from a record high of $1,711 per thousand board feet in May. Land and labor shortages persist.

Homebuilding has struggled to gain traction since racing to a rate of 1.725 million units in March, which was the highest level since June 2006.

Housing demand boomed during the COVID-19 pandemic, which fueled a migration from cities to the suburbs and other low-density areas as Americans sought spacious accommodations for home offices and schooling. The robust demand, also driven by record-low mortgage rates, far outpaced supply.

The inventory of previously owned homes is near record lows, leading to double-digit annual growth in home prices.

But the pandemic tailwind is gradually fading as vaccinations allow companies to recall workers back to offices in city centers and schools reopen for in-person learning for the new academic year.

Potential homebuyers are also balking at the high house prices. A report from the Mortgage Bankers Association on Wednesday showed applications for loans to buy a home decreased last week.

Residential investment contracted in the second quarter after three straight quarters of double-digit growth. A modest rebound is expected in the third quarter.

Last month, building permits fell in the Northeast and South. They rose in the West and Midwest.

The backlog of homes yet to be started increased 2.6% to 241,000 units, the third-highest reading in the series’ history, which should help to keep housing starts supported.

“Some of these permitted units that haven’t been started will be canceled, but most will eventually show up as starts as homebuilders work through their pipeline of homes under construction, supply chain bottlenecks are resolved, and prices of critical inputs such as lumber come off the boil,” said Ryan Sweet, a senior economist at Moody’s Analytics in West Chester, Pennsylvania.

Realtors estimate that single-family housing starts and completion rates need to be in a range of 1.5 million to 1.6 million units per month to close the inventory gap.

The stock of housing under construction climbed 0.4% to a rate of 1.373 million units last month.