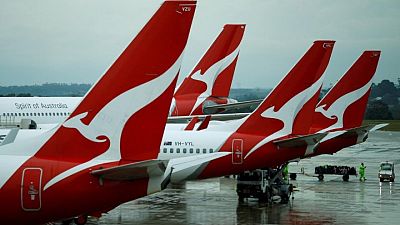 SYDNEY -Qantas Airways Ltd said on Wednesday it would require all of its employees to be vaccinated against COVID-19 as part of its broader commitment to safety, in line with some other airlines globally.

Pilots, cabin crew and airport workers will need to be fully vaccinated by Nov. 15, while other staff will have until March 31, 2022, the airline said.

There will be exemptions for those who are unable to be vaccinated based on documented medical reasons, which it said was expected to be very rare.

The airline said a staff poll found that 89% had already been vaccinated or were planning to be and around three-quarters of staff felt it should be a requirement.

“It’s clear that vaccinations are the only way to end the cycle of lockdowns and border closures,” Qantas Chief Executive Alan Joyce told reporters.

Qantas this month said it was temporarily idling about 2,500 employees without pay for at least two months in a bid to cope with fresh COVID-19 restrictions in Australia that have slashed domestic travel demand.

The airline has previously said it will require all international passengers to be vaccinated once Australia’s borders reopen.

Joyce said Qantas was also examining the possibility of requiring vaccinations for domestic travellers, given precedents overseas that made them mandatory for entry to venues like sports events and restaurants.

“We are still working it out,” he said. “No decision has been made.”

The state of Western Australia now requires travellers from COVID-hit New South Wales to have had at least one vaccine dose for entry.

United Airlines Inc this month became the first U.S. airline to require COVID-19 vaccinations for all domestic employees, in a move that was followed by Hawaiian Airlines.

Cathay Pacific Airways Ltd said in June that all Hong Kong-based pilots and flight attendants would need to be vaccinated against COVID-19 by Aug. 31 or risk losing their jobs.

A Virgin Australia spokesperson said it was considering whether it would mandate vaccines for some or all workers.