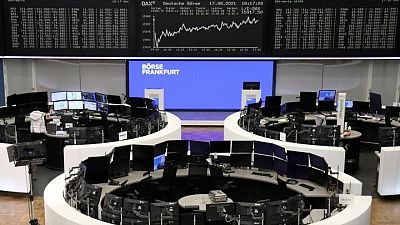 The pan-European STOXX 600 index inched up just 0.1%, with automakers and miners the biggest drags.

Sectors considered more stable during times of economic uncertainty, such as healthcare and utilities rose, while travel and leisure stocks clawed back some losses from earlier this week.

“Inflation stepped off the accelerator in July, but this doesn’t mean we’re set for a gentle ride,” said Sarah Coles, personal finance analyst at Hargreaves Lansdown.

“The underlying pressure on prices, particularly from soaring petrol and second-hand car prices, means it’s set to pick up speed again soon, and may well hit 4% by the end of the year.”

A much stronger-than-expected earnings season and improving economic data in Europe pushed the benchmark STOXX 600 to its longest winning streak in over decade last week. However, pandemic-related worries and uncertainty around central bank actions stalled gains.

Minutes of the U.S. Federal Reserve’s July policy meeting are due at 1800 GMT.

“Investors will be watching out for clues over when the Fed could start tapering bond purchases,” said Fiona Cincotta, senior financial markets analyst at City Index.

Danish brewer Carlsberg rose 2.3% after it lifted its full-year earnings outlook and said beer volumes in key markets China and Russia had risen to “well above” pre-pandemic levels.