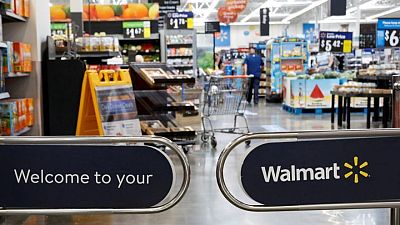 By Aishwarya Venugopal and Richa Naidu

The results kick off a big week of earnings from major U.S retailers – including Target and Macy’s – which are all expected to have benefited from people tentatively leaving their homes this summer. Investors are concerned, however, that their newfound freedom could be cut short with a resurgence in COVID-19 cases due to the more contagious Delta variant of the virus.

Sales at Walmart’s U.S. stores open at least a year rose 5.2%, excluding fuel, in the second quarter ended July 31. Analysts had estimated a growth of 3.69%, according to IBES data from Refinitiv.

The world’s biggest retailer has also been given a boost by stimulus checks handed out during the pandemic, and most recently from the Biden Administration’s advance child tax credits.

Walmart said it now expects fiscal 2022 U.S. same-store sales to be up 5% to 6%, compared with the low single-digit growth it had previously forecast. The outlook accounts for continued strength in the U.S. economy and no significant additional government stimulus for the rest of the year.

“The meaningful upping of guidance for the third quarter confirms our view that Walmart will continue to run on all cylinders, leaning heavily on its stores,” Moody’s retail analyst Charlie O’Shea said.

The company, which reported its biggest online sales growth of 97% last year as people used its quick delivery services to order essentials at the height of the pandemic, said U.S. e-commerce sales rose 6% in the second quarter.

The pace of Walmart’s online sales growth has slowed compared to the first quarter, when ecommerce revenue rose 37% and more people were shopping online. Still, Walmart is on track to reach $75 billion in global ecommerce sales by the end of the year.