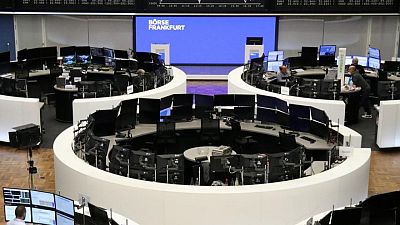 – European stocks fell to their lowest in a week on Tuesday as a spike in COVID-19 cases in Asia and elsewhere raised fears of a slowdown in global economic growth.

The pan-European STOXX 600 shed 0.3%, falling for a second straight session after the index marked its longest winning streak in over a decade.

“As much as concerns around the Delta variant are complicating the growth outlook, especially in some Asian economies, global growth momentum has already started to decline since mid-Q2,” analysts at HSBC wrote in a morning note.

Dutch tech firm Prosus, which has a stake in Chinese tech giant Tencent, fell 3.5% and was the top drag on STOXX 600.

Economically sensitive sectors such as oil and gas, travel and leisure, automakers and banks led the decline in morning trades.

A rally in the hard-hit cyclical stocks helped European shares hit all-time highs last week as expectations of a record jump in European corporate profit and optimism around the pace of vaccinations underpinned the continent’s economic recovery prospects.

However, a monthly survey of fund managers by Bank of America showed only less than half of the respondents now expect the European economy to further improve over the next 12 months – the lowest proportion since last June.

Investors took little comfort from data showing the number of employees on British company payrolls moved closer to pre-pandemic levels in July and pay growth hit a record high, albeit distorted by the effects of lockdowns.

Early reading of the euro zone’s second-quarter GDP growth and U.S. retail sales figures are due later in the day.

UK-listed shares of BHP Group jumped 6.7% after the world’s biggest miner posted its best annual profit in nearly a decade and said it would pay a record dividend.

Online trading platform Plus500 climbed 6.1% as it forecast annual revenue to be “significantly ahead” of analysts’ estimates.