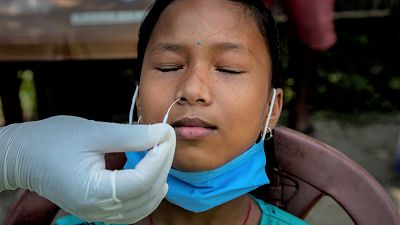 Researchers in the United Kingdom have confirmed that their new rapid COVID-19 testing method gives highly accurate results in as little as three minutes.

In a three-way comparison study published on Tuesday, the Birmingham University researchers found that their Reverse-Transcriptase-Free Exponential Amplification Reaction (RTF-EXPAR) test was just as accurate as the quantitative PCR and LAMP tests commonly used today.

However, the test's "one-pot" method made it much faster than the other two tests. It also means RTF-EXPAR could be deployed at airports, bars and restaurants without the need to send samples to a lab, the researchers said.

In a timed trial the RTF-EXPAR test detected COVID-19 in eight minutes and 45 seconds. It took a LAMP test 11 minutes and 15 seconds, and a PCR test over 42 minutes to detect the virus in a sample with the same viral load.

A test on a sample with a higher viral load cut the time needed for an RTF-EXPAR test to just over three minutes, the researchers said.

The researchers said the test could be deployed at entertainment venues, airport arrival terminals, and in remote settings where clinical testing laboratories are not available due to a simplified "one-pot" method that requires less equipment than other higher-accuracy COVID tests.

"The test is suitable for near-patient testing, so should be much cheaper than laboratory-based tests," Beggs told Euronews Next.

The University of Birmingham has filed a patent for the test, and hopes to find a partner to roll it out commercially as soon as possible, Beggs added.

While the test was designed with COVID-19 in mind, it can quickly be adapted to cover both new variants and other viruses altogether.

"We’ve already made it for point of care COVID testing, but we want to expand it to other molecular diagnostics. We have made it work in detecting the virus that causes cervical cancer in smear tests," Beggs said.

How does the RTF-EXPAR test work?

Both PCR and LAMP tests work by detecting the COVID virus's genetic material - RNA - in samples collected from patients.

To do this a laboratory technician must first convert the RNA to DNA in a process called "reverse transcription" and then "amplify" the collected material to create a detectable sample.

"Both the reverse transcription and amplification steps slow down existing COVID assays that are based on nucleic acid detection, compared to antigen tests, such as lateral flow, which do not have these steps," said Professor Tim Dafforn from Birmingham's School of Biosciences.

"However, while this makes lateral flow tests faster than those based on PCR and LAMP, in return they are typically less sensitive".

To speed up the process while remaining accurate, the Birmingham researchers created a new RNA to DNA conversion process that avoids reverse transcription - hence the "RTF" in the test's name.

The exponential amplification reaction or "EXPAR" process used in the Birmingham test was also simpler than those used in PCR or LAMP tests, Dafforn said.

“However, while LAMP also uses a single temperature for amplification, EXPAR is a simpler and a more direct process," he explained.