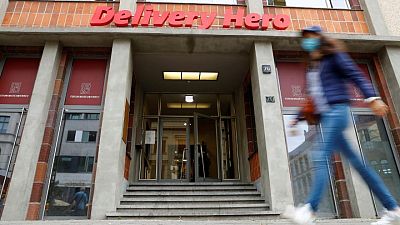 -Delivery Hero is considering notching up its investments beyond the initial plan, as it seeks to ride the first-half momentum to win more market share, the German online food takeaway firm’s finance chief said on Thursday.

The Berlin-based group raised its 2021 revenue and gross merchandise volume outlook earlier in the day, but tweaked its forecast for adjusted core operating margin to minus 2%, at the lower end of previous forecast.

“The small implied downgrade to consensus EBITDA (earnings before interest, tax, depreciation and amortisation) today comes at a difficult time,” Jefferies said after the earnings report.

The group returned to its home market Germany earlier this year at a time of a furious boom in rapid delivery there that pits it against startups like Gorillas that are attracting lavish backing from venture capital investors.

With demand for at-home deliveries surging during the pandemic, Delivery Hero has invested extensively both in food delivery and in the so-called quick commerce, which aims to deliver goods in as little as 10 to 15 minutes.

“We are considering to invest a little bit more,” Chief Financial Officer Emmanuel Thomassin told reporters. He said the those would be investments in core operations while the 550 million euro full-year investment goal for new markets remained unchanged.

The company, which operates in about 50 countries across Europe, Latin America, Asia, the Middle East and North Africa, now sees revenues in a range of 6.4 billion to 6.7 billion euros ($7.52-$7.87 billion) for the year compared to earlier expectations of 6.1 billion to 6.6 billion euros.

It more than doubled quarterly revenues to 1.55 billion euros, on continued strong demand for its food and rapid delivery services even as pandemic-related restrictions are eased across its markets.

Chief Executive Officer Niklas Oestberg said, however, it would take time before investments in quick delivery began paying off.

“Quick delivery will be a huge part of Delivery Hero. but the margins in groceries are incredible low,” Oestberg told Reuters. “In order to make it economical we need to innovate and improve. It is still a long way to go.”

When asked earlier about the 5.09% Deliveroo’s stake it took earlier this month, Oestberg said it made financial and strategic sense, without elaborating further.